The poem, titled “Days I Don’t Want To Go To Hagwon,” depicts how the author would like to “chew up mom” as painfully as possible, “digging out her eyes and pulling out all her teeth” to escape hagwon, private educational institutes.

Accompanied by an illustration, cruel words from the fifth-grader at an elementary school shocked many adult readers, with some strongly denouncing the publisher and the parents for the decision to publish it.

For Junko Yokota, an international guru on children’s books, the controversy poses a very difficult question. 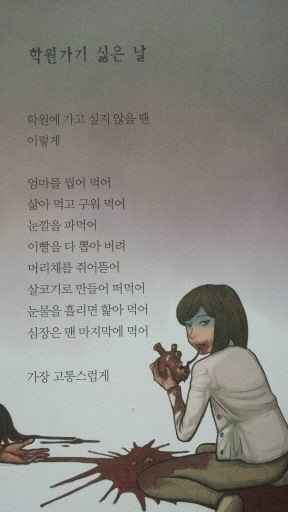 Speaking at a press conference in Seoul as chair of the jury for the 2015 Nami Concours, an international illustration competition organized biannually by Korea’s Nami Island, she stressed adults’ responsibility to guide a child’s literature or any literary experiences.

“I don’t believe that a book by itself will completely influence how a child thinks or feels about the world,” the Japanese-American said. “And I believe that books should expand our understanding of the world, including dark things and the hopeful things.”

However, Yokota voiced concerns about the unwanted impact that the publication of such a “strong and difficult” work could have on the child, when it was published with the child’s name.

“I don’t think there is a value in internally memorializing (such) a moment in time. In other words, if this child felt this way at a moment, did (she) really feel something (that deserves to go into a book)?”

“Sometimes I think about what I have said or done out of a moment of anger or despair, I don’t want that to be how I am identified forever.”

The poem, written in Korean language, was published late March along with other works of the girl under her name.

Yokota is also the chair of the international jury of this year’s Caldecott Medal and Honor Books, highly regarded awards in the field of children’s books and illustrations.

“Overall, I do think that with all the literature and literary experiences, adults have a responsibility to introduce good things (to children) and talk about difficult things, and help them negotiate life’s ups and downs.”

“We all as an adult have the responsibility to show them the bigger world than they know by themselves,” she said.

The publisher of the poem decided Thursday to withdraw all copies of the book, offering a public apology for causing an uproar.

The child poet’s mother, also a poet herself, said on a radio that she supports her child’s work and that it should be seen as a reflection of how Korea’s dog-eat-dog society is pushing our children to hagwon to excel at school.

“I stopped sending my girl to hagwon, after reading it. My daughter has written many beautiful poems. It is saddening to watch how people are reacting to her single work.”