By Korea Herald
Published : May 4, 2015 - 19:39       Updated : May 4, 2015 - 19:44
President Park Geun-hye on Monday criticized the scale of the latest deal on the public servants’ pension reform as falling short of public expectations, amid growing complaints that it was hastily reached by rival parties.

“(The agreement on) pension reform has slightly reduced the financial burden (to operate the system), but it is regrettable that the scale of reform fell short of people’s expectations,” Park said at a meeting with senior secretaries at Cheong Wa Dae.

The remark came three days after rival parties agreed to raise the contribution rate of public service pensions from 7 percent to 9 percent in the next five years, while reducing entitlements from 1.9 percent to 1.7 percent in stages over 20 years. The reform measure is expected to save about 333 trillion won from 1,980 trillion won in public funds estimated to be spent to operate the pension system over the next 70 years.

The president’s discontent came as her party had originally pushed to raise the contribution rate to 10 percent and cut the entitlement to 1.65 percent to garner savings of nearly 429 trillion won.

Park, who returned to work Monday after a week of bedrest, welcomed that the parties could strike a deal before the deadline, saying it was a step forward for her reform drive both in public and private sectors.

She, however, voiced her opposition over the agreement to increase payouts from the national pension system for the general public, which many fear will raise the burden on taxpayers. She stressed that the matter required the people’s consent first and needs to be discussed separately from the reform bill on public servants’ pension system.

While her remark did not imply that she would use her veto powers to block the plan, she clearly disapproved of the parties’ decision that was made beyond their authorities.

“An institutional change to modify the nominal income replacement rate of the national pension, which has about 20 million subscribers, would place a huge burden on the people,” she said. 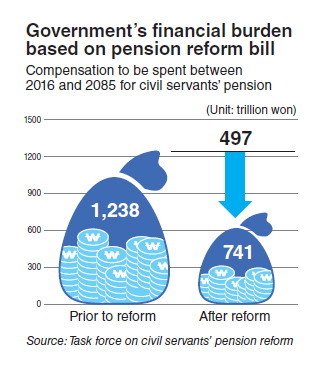 “It is something that must seek the people’s consent beforehand and also a matter that should be decided carefully after forming a social consensus.”

As per the unexpected bipartisan agreement the nominal income replacement rate ― the percentage of a subscriber’s annual income that is paid out each year on retirement ― will be raised to 50 percent from the current 40 percent. This means an employee would receive about 50 percent of his annual income as pension after retirement.

But Cheong Wa Dae and the government have complained to the ruling party that this would require a massive injection of public funds and that the decision was made without proper consultation with the government.

Meanwhile, the president’s remarks is expected to spark a heated debate in parliament with the ruling party seeking to avert criticism for reaching an agreement with the main opposition party without consulting the government. The inclusion of the national pension system ― that has about 20 million subscribers ― in the agreement was the major demand of the main opposition party, and the ruling party is being criticized for blindly accepting it for political reasons just to get endorsement for reform of the public servants’ pension system that has only 1.1 million subscribers.

Welfare minister Moon Hyung-pyo, former senior researcher on the nation’s pension system, lashed out at the decision saying that that the funds saved from public servants’ pension fund won’t be enough to cover the cost of raising the income replacement rates of the national pension system. The ministry has claimed that subscribers need to spend an average of 18 percent of their income to fund a 50 percent income replacement rate. A subscriber is obliged to pay 9 percent of their monthly income to the national pension fund.

The ruling party chief tried to contain the fallout by admitting there were shortcomings.

“I humbly accept the criticism over the civil servants’ pension reform bill and I agree to many parts of (the deal that drew criticism),” he said.

“But we will put efforts to reflect the public opinion in the course of the negotiation.”

The main opposition New Politics Alliance for Democracy, however, pressed the ruling party to keep its promise and pass the bill by fully reflecting the agreement reached on Saturday. “It is a meaningful work to raise the income replacement rate to 50 percent along with the reform of civil servants’ pension reform,” said NPAD leader Moon Jae-in.

The meeting on Monday was Park’s first with her aides since she returned to work from her recent Latin American tour. During the meeting, the president touched on a wide range of contentious issues including her drive to reform the political sector as well as ways of granting proper presidential pardons.

On the outcome of the by-elections last week, Park said it carried the people’s message for the government to initiate radical reform and eradicate corruption in public and political sectors. Her Saenuri Party achieved an unexpected victory in the parliamentary by-elections amid growing criticism over her top aides involved in a snowballing graft scandal.