‘Sixteen’ compete for spot in JYP’s next girl group

The program’s name refers to the number of contestants who will vie for a spot in the new seven-member group to come from JYP.

The new group would be named “Twice,” JYP Entertainment’s CEO Park Jin-young revealed at a press conference at the 63 Convention Center in Yeongdeungpo-gu, Seoul, Wednesday.

The 16 contestants are from Korea, Taiwan, Japan and Canada, ranging in age from 13 to 20. 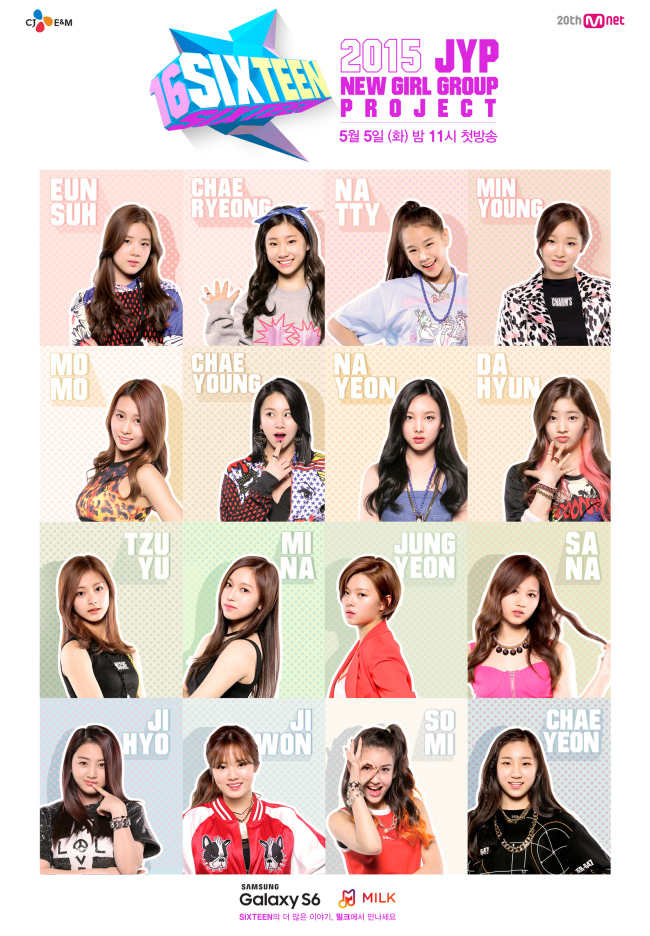 The revelation of the girls’ profiles ahead of the show indicated that JYP would be taking fans’ preferences and online responses into consideration when choosing the final members.

“We will be allowing the viewers to vote for their favorite member, and reflecting those results in the final decisions,” said “Sixteen” producer Kim Jeong-beom.

“Park Jin-young is well known for his preference for idols with an unusual kind of charm and talent,” added the show’s chief producer Choi Seong-jun. “The viewers will get to see how Park’s choices differ from theirs, and perhaps Park will make an open appeal to herd more votes toward the members he has in mind.”

The show’s creators and Park all repeatedly stated that the show would be different from previous, similar audition programs because they are looking for talents other than singing and dancing.

“Of all the major entertainment agencies, JYP pays the most attention to factors other than singing and dancing skills,” said Park. “We want to see these contestants’ comprehensive star appeal, so the missions each week will be testing their creativity, quick thinking and personalities.”

The girls will be split into “major” and “minor” groups each week according to their performance in the week’s mission. One contestant from the “minor” group is eliminated from the show.

The stakes are high for everyone in the competition, whose final winners will compose JYP’s first girl group since Miss A debuted five years ago.


“The group will hopefully have the Wonder Girls’ and Miss A’s natural, healthy feel, with an edgier and wilder side,” said Park. “I want to upgrade this next group by adding elements like hip-hop and rap.”

“I really have no idea who I’ll choose at this point,” he added. “I need the viewers’ help in choosing the best members for this group.”

The 16 contestants ― Eunsuh, Chaeryeong, Natty, Minyoung, Momo, Chaeyoung, Nayeon, Dahyun, Tzuyu, Mina, Jungyeon, Sana, Jiyo, Jiwon, Somi and Chaeyeon ― will appear in the premiere of Mnet’s “Sixteen” on May 5. The show will air weekly on Tuesdays at 11 p.m. for 10 weeks.