By Claire Lee
Published : Apr 22, 2015 - 19:03       Updated : Apr 22, 2015 - 19:03
A few years ago, Kim Seon-jung, a middle school math teacher, noticed one of his students would always jiggle his legs while he sat down in class. As his behavior became distracting, Kim told him numerous times to stop. The student responded by pounding on the desk and swinging his pen with his fingers.

Alarmed by the student’s behavior, the teacher consulted with the parents, only to find out the teen was addicted to the Internet.

“He was an introvert who didn’t have many friends in school, and both of his parents were working. As an only child, he would spend a lot of time alone at home,” Kim wrote in a report submitted to an NGO specializing in education and youth rights.


“Unlike many teens who are addicted to online games, he was actually addicted to online chatting. He said when he was offline, he was constantly worried about what his friends, all of whom he met and interacted with online, would be talking about without him in the chatrooms. Most of his social activities were taking place in cyberspace, and being offline made him feel extremely anxious and isolated.”

The student is one of a growing number of South Korean teens who are addicted to the Internet and smartphones. According to the latest government data, the number of teenagers who are at risk of Internet or smartphone addiction has been rising over the past three years.

As of last year, 29 percent of all teenagers were at risk of smartphone addiction, while 12.5 percent were at risk of Internet addiction disorder. Data also found that children of double-income families and single-parent households are most likely to develop media addiction.

“Most addictions are not just caused by what people are addicted to. For example, game addiction is not solely caused by the game itself. There is always something else,” said Cho Hye-jin, who has met teen Internet addicts at the National Information Society Agency.

“A lot of the times, teen Internet addicts have problems with their relationships with their family members or friends. It can also be related to a lack of parental presence or attention. Very often, they start by using the Internet, games and SNS as a way to indulge their social or emotional needs (that are not being met by their parents).” 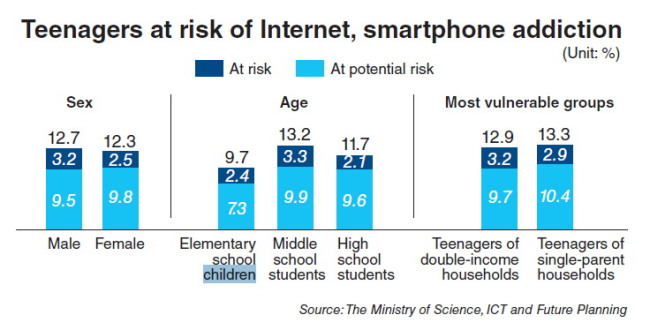 Symptoms of Internet addiction can have extremely negative effects on teenagers and their lives, experts said. Signs of addiction include difficulty waking up for school, feelings of anxiousness when they are not online including shakiness and moodiness, sleep disturbance and having trouble completing tasks at school and home. The addiction may also lead to isolation from family and friends.

One of the teen smartphone addicts currently being treated at the National Information Society Agency physically attacked her parents when she had her smartphone taken away. The middle school student threatened to commit suicide if she did not get her phone back, and repeatedly claimed that she would be bullied at school if she did not constantly participate in KakaoTalk group conversations. The teen was eventually taken to the agency after her parents thought she was spending too much time alone with her phone.

“Children who are addicted to the Internet have a high chance of missing out on normal teen life and experiences, which are crucial for the successful transition into adulthood,” said Kim Sung-byuk, who oversees media policies for teenagers at the Gender Equality Ministry.

An unhappy childhood or teenage years may also lead to addiction. A man in his early 20s was treated at the National Information Society Agency last year for online game addiction. Growing up, he was often emotionally abused by his stepfather, while his mother was negligent. When he was bullied as a teenager by his classmates, he was not convinced that his parents would help him, so he endured the abuse without telling anyone.

However, he received good grades and eventually enrolled in a university, but soon afterward he became addicted to online games. Before seeking help at the agency, he had been skipping all of his classes to play games in his room alone. He claimed it was the only way for him to “relieve stress and communicate with the world.”

“The key is to find out exactly what caused the addiction, rather than simply getting rid of what the person is addicted to,” said Cho from the agency.

“Banning games from game addicts won’t solve the situation. Once the real cause of the addiction, such as family problems, is solved, the addiction usually goes away naturally. This is why parents of teen addicts are also encouraged to receive therapy, because they can very often be the cause of their child’s addictive behaviors.”

Meanwhile, the number of double-income families keeps increasing in Korea. As of 2013, there are more than 5 million double-income households, accounting for 43 percent of all households in the country.

A high school teacher, who only wanted to be identified with her last name Oh, feels today’s hyper-connected culture inevitably affects the way Korean teenagers socialize with one another ― but not necessarily in a positive way.

“I’ve seen my students using KakaoTalk for occasions that require you to do it in person or at least through a phone call,” she said. “They’d break up with their boyfriends or girlfriends by sending a single text message. They’d cut off all contact with someone they didn’t want to be friends anymore ― by just ignoring texts and not texting at all ― instead of explaining in person why they wanted to end the relationship. This concerns me about our next generation.”