What ails retail in Singapore, especially in big department stores?

Major department stores are vocal in their complaints.

Metro Holdings chalked up what it called a “disappointing level of sales” that resulted in losses being incurred by its new department store at The Centrepoint in the final quarter of last year.

Isetan (Singapore) not only reported a net loss of S$3.1 million ($2.26 million) for the year ended Dec. 31 on the back of higher rents and slower sales, but also complained of the “challenging and competitive environment.” The department store operator said that other than its new store at Jurong East, other outlets registered lower sales for last year compared with 2013. 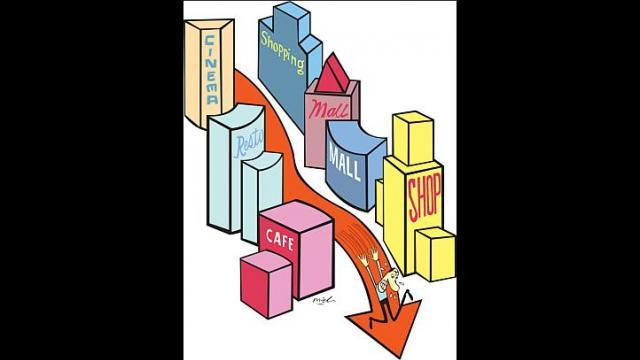 It ceased its own retail operations at Wisma Atria earlier this month, preferring to rent out the premises instead.

Over at Al-Futtaim Group, the Dubai-based owner of Robinsons and John Little closed the Marks & Spencer outlet at The Centrepoint on March 29, after 28 years there. It had opened in 1987, formerly known as St. Michael.

It will also close the John Little stores at Marina Square and Tiong Bahru Plaza to “focus manpower and resources on enhancing its Plaza Singapura and Jurong Point stores,” the group said.

Just how bad is the situation?

Figures from the Department of Statistics show that sales at department stores fell 12.4 percent in January, compared with a year ago. Total retail sales value has also fallen.

The value is estimated at S$3.7 billion in January, a drop from S$3.9 billion a year ago. Department store sales form part of total retail sales value.

Despite falling numbers, the retail sector continues to be important. As at December last year, it employed 173,000 workers, about 4.8 percent of total employment.

Experts say one reason for the lackluster retail scene is the fall in visitor arrivals.

The Singapore Tourism Board reported a 3.1 percent fall in visitor arrivals to 15.1 million last year, lower than its projection of 16.3 million to 16.8 million. This is also the first drop since 2009.

Nine out of Singapore’s top 15 visitor-generating markets, including China, had falling visitor numbers. The first two months of this year saw only 2.4 million visitors, a 5 percent dip compared with a year ago.

Department stores also face the challenges of rising rent and labor crunch, like all businesses in high-cost, labor-scarce Singapore.

On top of that, department stores face unique challenges.

SIM University’s Guan Chong, head of the marketing program at the School of Business, says cities in the region, such as Bangkok and Hong Kong, are competing to be a regional shopping destination. Singapore’s high prices and strong dollar do not help.

Indeed, Kesri Kapur, Al-Futtaim Group’s head of business in Asia, said the group’s stores in Thailand and Malaysia see good business. Apart from price, he thinks service staff perform better in those countries, as they have a more positive attitude, which helps drive some of the sales.

Kapur is not alone in saying poor sales service is one reason for poor performance in department stores here.

Insead’s professor Amitava Chattopadhyay, an expert in branding and consumer behavior, compared shopping in Singapore with shopping in the United States.

Over in the U.S., places like high-end fashion retailer Nordstrom and outdoor gear and apparel retailers REI and LL Bean have no-questions-asked return policies, as well as retail staff who know several brands across one product category, for instance.

He said: “In most of the rest of the world I’m familiar with, such as the U.S., or even in other parts of Asia, you walk into the store, and you have sales people who are responsible for the section, like shoes or appliances.

“In Singapore, it’s by brand in many stores, such as Takashimaya or Tangs. Recently, I chose a few pairs of shoes and when I looked for help, they told me: ‘I’m dealing with brand X so I can help you with this pair, but for the other brands you have to find another sales person.’”

At Nordstrom, he would get recommendations across brands from one staff member.

He said: “There is a better understanding of what target customers want from the shopping experience in the U.S., but here it’s become ‘I have this thing that I want to peddle.’ The quality of service is poor. Part of it is structural. Retailers are like gigantic real estate agents, they aren’t really interested in the customer’s experience.”

Singapore still has to get the basics right, such as great service and differentiated shopper experiences, said Dr. Prem Shamdasani, associate professor of marketing at the National University of Singapore Business School.

While some may argue that the problem is one of excess supply, Alice Tan, Knight Frank Singapore’s head of consultancy and research, begs to differ.

Singapore retail space per capita is 11.8 square feet per person.

This is 38.2 percent lower compared with Hong Kong, a strong retail competitor with a famed reputation, at 16.3 square feet per person.

This could explain why retail sales per square meter of floor area are still healthy.

Figures released last month showed retail sales per square meter of floor area of the overall retail trade industry ― including personal goods, and transport and household equipment, for instance ― grew by 4.8 percent over 2012 to S$12,600 in 2013.

Retailers of personal goods registered the highest retail sales per square meter of S$14,700, a 4.8 percent increase over 2012.

But department stores are not benefiting from the increase. Instead, they are bearing the brunt of a change in shoppers’ habits.

Dianna Chang, marketing lecturer at SIM University, said Singapore consumers seek bargains, even for luxury goods, which means that sales for hedonic products, including luxury goods, are likely to fall.

Consumers not only shop online, they also aggregate purchases and buy in bulk overseas to get discounts.

UOB economist Francis Tan added that other alternative sources of retail, such as trade fairs and IT, and consumer technology exhibitions like the annual IT Show and Comex, have taken a slice of the pie.

They often offer goods at discounted prices, a lure for the bargain-hunting Singaporean.

He said: “People do their shopping there, releasing pent-up demand for the past two to three months, so the next few months will be dry for the brick-and-mortar retailers.

“Since such fairs started, they changed the retail landscape. You can’t just blame online retailers.”

Online shopping may be catching on, but has hardly become mainstream. A government survey conducted from October 2012 to September 2013 showed that a third of 11,000 households had bought things online. They spent an average of S$260 a month on online purchases, or 4 percent of what they spent in total.

What is happening in department stores here mirrors trends overseas.

The trend of middle-class shoppers shrinking in markets such as the United States, Canada and Europe, has seen mid-level retail chains such as Sears and JCPenney closing stores.

Shamdasani said retailers have to shift toward offering more value online and offline.

“There is increasing evidence that e-commerce ― and especially m-commerce (mobile commerce) with the high mobile phone penetration ― is enjoying strong growth in both mature and emerging markets,” he said, adding that retailers need to look at ways to better integrate physical and online shopping.

For example, retailers can use technology to offer “more interactive and bespoke shopper conveniences,” such as letting customers try out and customize products, and arranging delivery.

The Al-Futtaim Group, for instance, is one of those paying attention to consumers’ wants, leading to Robinsons getting positive results in the last few months.

It will introduce online shopping with Robinsons by the end of this year, and for Royal Sporting House and Marks & Spencer next year, a model where consumers place an order and choose to collect it in store or via home delivery.

Chattopadhyay says the solution is understanding what a consumer is looking for. “Retailers have handed responsibility to the brands, but they could create a different relationship with brand owners.”

He said other things that can be done include training staff to be more knowledgeable about products and brands, and dealing with customers.

Policies such as allowing staff to buy at a discount to get a better understanding of the products and brands they sell, would also help.

Such policies would also create store loyalty for the staff.

R. Dhinakaran, managing director of Jay Gee Melwani Group, who is also vice president of the Singapore Retailers Association, said retailers with deep pockets and effective business strategies would survive, but they would have to adjust to the new reality of modern retail and subdued consumption. He said relying only on the Singapore market would be dangerous, for instance, so retailers have to look beyond the market here.

It is convenient to blame high rental, or oversupply of retail space, or shoppers’ penchant for discounts, for falling retail sales.

But as the experts surveyed for this article suggest, retailers should also take a hard look at themselves and evaluate if they are offering shoppers an experience they want.

It may be convenient to organize a store according to concessionaries’ wares and group them by brand for example.

But why would a shopper who needs a pair of sports shoes want to go to a department store and walk around six different brand segments, engage with six different staff, repeat her needs six times, and wait six times for staff to find her shoe size, wasting much time and effort in the process?

She would save time and get better service going to one boutique shoe shop that offers shoes from six brands.

Department stores in Singapore have to go beyond letting brands peddle their own products and organizing themselves for their own convenience, to putting the customer first.

Until that happens, department store sales are destined to continue to fall.