The state-run Korea Development Bank, the main creditor of DSME, said Sunday that speculation about DSME’s takeover was “unrealistic.”

“Merging KOSPI-listed DSME and STX, which is under a restructuring program, would most definitely anger shareholders,” a KDB official said on condition of anonymity. “The rumor is simply unrealistic.” 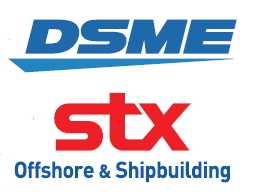 The appointment sparked speculation among local investment banks about Jung’s role as a “bridge” between the two organizations for the merging process. Jung had worked at DSME for 31 years before assuming the STX post.

Some in financial markets said that if the takeover was made, STX’s credit ratings would rise and the company would be listed on the stock market.

But for DSME, absorbing STX could be a double-edged sword that would allow the firm to strengthen its engine-related capabilities, but at the same time increase its deficits.

“The scenario is most likely to be the same as Samsung’s case,” a market analyst at a Seoul-based securities firm said, declining to be named.

“Industries that have run into difficult times ― steel and shipbuilding ― appear to be attempting to overcome the situation by mergers and other measures,” she said, adding that buying STX would hurt DSME’s sales.