Still, the estimate hovered far above the 5.47 trillion won forecast by local brokerage houses, showing a positive sign that the Korean tech giant may be shaking off its profit slump.

The company said sales were estimated at 47 trillion won for the January-March period, down 12.44 percent on-year and 10.87 percent on-quarter. 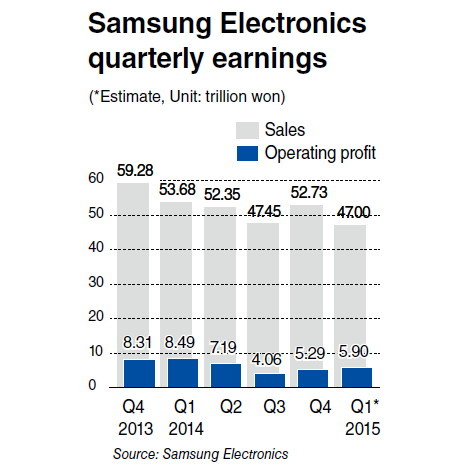 “The operating profit is an almost 10 percent improvement from analysts’ estimates,” said Yoo Jong-woo, an analyst at Korea Investment and Securities. “Profit in semiconductor sales is likely to beat estimates.”

Analysts agreed that the profit was boosted by the robust demand for chip products, but also predicted the planned launch of Samsung’s flagship smartphones Galaxy S6 and S6 Edge on Friday would help the company’s overall profit in the coming months.

“After hitting bottom in the third quarter of 2014, the firm has been on the growth trend,” Lee Seung-woo, an analyst at IBK Investment & Securities, said of the company’s future device sales.

Samsung didn’t provide its net profit estimate and a breakdown of individual business divisions for last quarter. The final results will be released later this month.

Local brokerage houses estimated Samsung’s IT and mobile division, which makes up almost two-thirds of the company’s income, to have logged at least 2 trillion won in profit, up from 1.96 trillion won in the fourth quarter of 2014.

The device solutions business, which covers semiconductors, is estimated to have recorded an operating profit of more than 3 trillion won in the January-March period, they said. Shares of Samsung traded at 1,464,000 won Tuesday on the main bourse as of 2:53 p.m., down 0.41 percent from the previous session. The profit estimates were released before the local stock market opened.