According to data compiled from the nation’s top 10 conglomerates, the Korean auto giant paid out an average of 92.8 million won ($84,640) for ordinary workers in 2014, up 2.86 percent from the previous year. 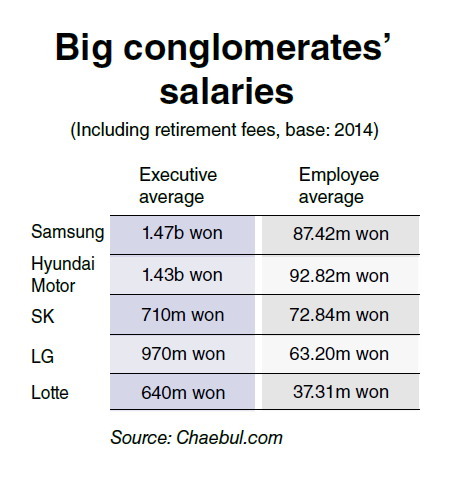 Among individual affiliates of the groups, Samsung Electronics and SK Telecom remained the top-paying companies, with their average pay exceeding 120 million won. Hyundai Motor and Kia Motors came in second with 97 million won.

Across the top 10 conglomerates, executives were awarded 980 million won on average, while ordinary rank-and-file workers received an average of around 76.32 million won.

The executive pay decreased 4.52 percent from a year ago, but the pay for ordinary workers increased 3.29 percent during the same period.