Those who are sensitive to pollen develop symptoms ― generally at its worst from early morning to 9 a.m. ― during these seasons. The symptoms are common in children under the age of 5. From 5 to 10 years old it is more prevalent in boys than girls, but among those aged between 10 and 20, more girls are affected than boys.

Most people are genetically prone to pollen allergies. Allergies are hypersensitive reactions to a causative agent brought on by frequent exposure to such allergens. Depending on the systems affected, allergic rhinitis, asthma, dermatitis and conjunctivitis can arise. Those who develop systemic symptoms are categorized as having anaphylactic shock.

Hypersensitivity symptoms worsen with more exposure. Initially, symptoms only arise in response to the triggers, but then, other factors such as pollution, cold conditions, exercise, particular smells and even psychological triggers can produce these symptoms. If you suffer from the same symptom at the same time of the year, you should see a doctor for allergy treatment.

Airborne allergens are more common, with smaller particles being more irritable than larger particles.The pollen from wind-pollinated flowers is generally small in size ― between 10-50 micrometers. Insects pollinate flowers such as acacia and sarubia. Pollen from birch, oak and alder trees are particularly small in size, and are major allergens. Pine pollen and willow tree pollen, which are frequently seen after rainfall, are larger in size and do not usually trigger allergies.

White fluffy pollen seen in spring is not actually pollen, but actually seeds from willow trees, aspen trees and poplar trees. These seeds generally do not cause allergy, but those with atopic dermatitis and dry or sensitive skin can sometimes develop itchiness, or develop conjunctivitis. 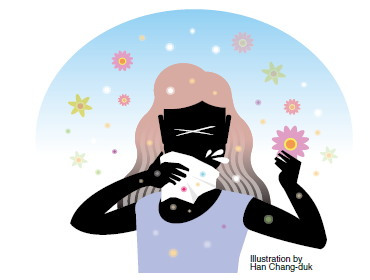 Most trees release pollen from March to May, while wind-pollinated plants and weeds are more common between August and October, and September and November, respectively.

Allergic rhinitis due to pollen causes sneezing, itchiness in the nose, runny and blocked nose. This can arise together with allergic conjunctivitis. Patients may complain of poor appetite, nausea, loud snoring when sleeping, and can sound like they have a blocked nose.

When the pollen disappears, the symptoms disappear within 2-3 weeks. Depending on the causative agent, some patients may have symptoms all year, with symptoms worsening during spring and autumn.

In order to reduce the symptoms of allergy, you should avoid exposure to pollen during these seasons. Do not open the car or house windows when there is abundant pollen in the air. Make sure you shake pollen off your clothes when you return home, and brush your teeth, wash your face and blow your nose to reduce the amount of pollen on your body.

It may also help to wear a mask or glasses, and make sure you drive with your car window closed. If possible, avoid outside activities as much as possible during these seasons.

The most important treatment is prevention by avoiding causative agents, but avoiding pollen in the atmosphere is very difficult. Therefore, those who develop short-term symptoms of allergies can use antihistamines.

Antihistamines are mainly used to treat symptoms of the common cold such as runny nose, but can cause drowsiness. More recently, nondrowsy antihistamines are being used. If the symptoms are not brought under control, steroid sprays can be used in the nose. Most patients are successfully treated using a couple of different agents, and eye drops can also be used if needed.

Failure to treat the allergy can lead to worsening symptoms, so patients who initially only had allergies to the pollen can develop allergic symptoms to other substances that are present all year-round. Therefore it is important to manage pollen allergies correctly.

Lee Byung-Jae is a doctor at Samsung Medical Center in Seoul and
lectures at Sungkyunkwan Univeristy’s School of Medicine. ― Ed.