According to Statistics Korea’s data on the country’s economically active population, the average age of people working under various labor contracts reached 44.2 in 2014, or about 0.2 years older than the figure in 2013. 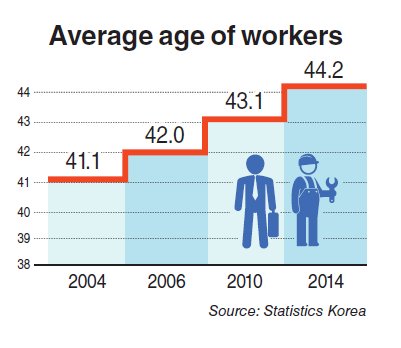 An increasing number of senior citizens are landing jobs, while the younger generation is struggling to find jobs in the market.

“Those born between 1955 and 1963, known as the baby boomers, are still actively working, which has contributed to increasing workers’ average age in the market,” the statistics bureau said in a report.

“More than 2 million workers are over 65 years old. But in 2000, there used to be less than a million people.”

These baby boomers were not yet prepared to retire as they felt insecure about their financial status, Lee Si-kyun, director at the Korea Labor Institute, told a local media outlet.

The real problem might occur when they retire because there will be a huge vacuum in the employment market.

Also, the economy will suffer a manpower shortage due to the aging society fueled by a low birthrate.

“Then the country’s economic growth cannot be guaranteed,” he said.