Incorporating its functions of underwater operations, training and education, and maintenance into the new command, the Navy seeks to conduct more integrated, efficient and stable submarine operations, Navy officials explained.

With the launch, the South has become the world’s sixth country to have a submarine command. Traditional maritime powers such as the U.S., Japan, France, Britain and India have run their submarine commands.
“The launch of the submarine force command is a clear display of our will to perfectly defend our East, West and South Seas through the enhanced quality and quantity of our submarine capabilities,” the Navy said in a press release.

“With the command, we have secured capabilities to more proactively deter North Korean threats by effectively controlling and managing our submarine forces ― strategic weapons systems that could stealthily strike the heart of enemy forces.”

In the 2020s, the Navy plans to add nine 3,000-ton submarines equipped with vertical launchers for submarine-to-ground missiles. The 209-class submarines, first introduced in 1992, will be decommissioned in the 2020s with the addition of the new submarines.

According to South Korea’s 2014 defense white paper, North Korea has some 70 submarines including midget submarines, but many of them are old and small-scale.

The ceremony to mark the launch of the command is to be held Monday in Jinhae, South Gyeongsang Province.

South Korea’s efforts to secure submarine forces began in 1984 with the introduction of a midget submarine, named Dolgorae. In 1990, the Navy established the 57th Submarine Squadron headed by a Navy captain. It acquired its first 209-class Changbogo submarine in 1992 from Germany. Three years later, it founded the 9th Submarine Flotilla.

In its decades long submarine operations, the Navy has reported no accidents. 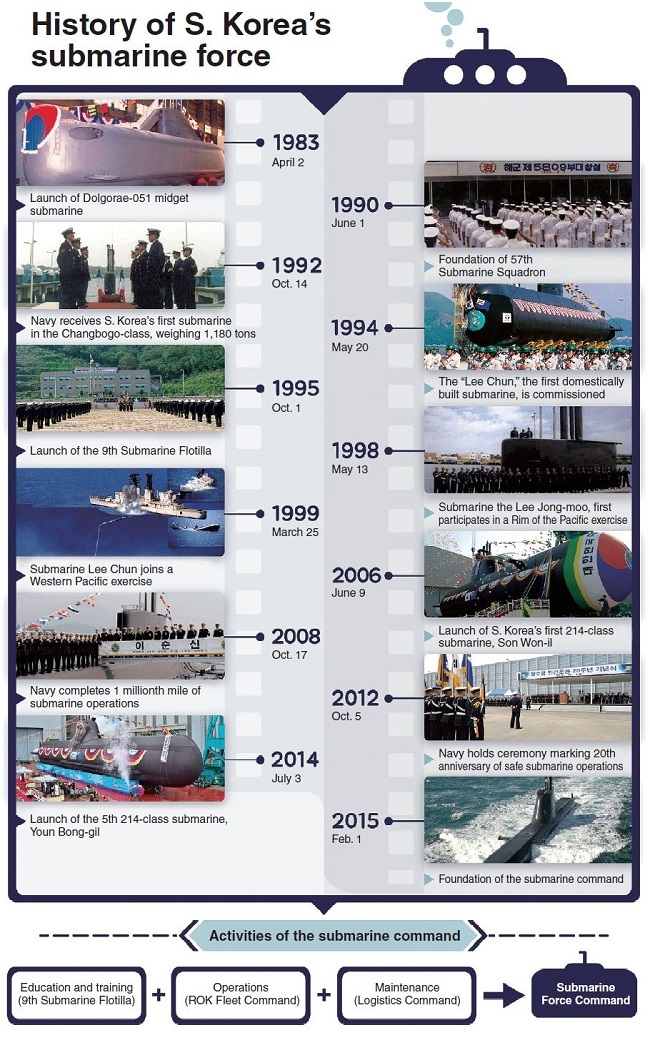