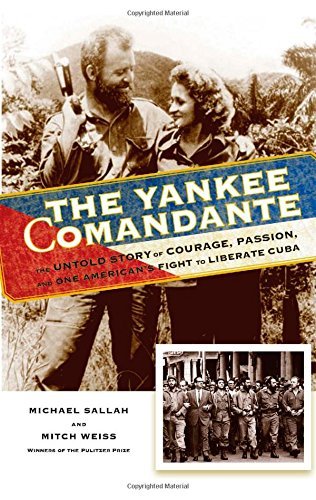 The Yankee Comandante
By Michael Sallah and Mitch Weiss
(Lyons)


The saga of William Morgan, the Yankee comandante of the Cuban Revolution, is a case of fact imitating fiction.

An Eagle Scout, an ex-con, a fire-eater and a minor Mafioso, Morgan followed the scent of romance through two marriages and a childbearing affair in Japan before tossing aside these encumbrances to sneak into the ranks of the Cuban rebels.

Here his life acquired a certain nobility through bravery, a belief in freedom and “standing up for the little guy,” and still another love story. He became one of the two foreigners to achieve the rank of comandante. (The other was Che Guevara.)

After Morgan died, New York Times correspondent Herbert Matthews believed that his friend Ernest Hemingway was the one to write the story. Hemingway, after all, wrote “For Whom the Bell Tolls,” a novel featuring American Robert Jordan fighting the fascists during the Spanish Civil War.

Well, Hemingway did not write this book. Instead, two very good journalists tried their hands at it. Michael Sallah and Mitch Weiss bring to light many of the strange facts and heroics of Morgan’s revolutionary days. But short sentences and melodrama do not make it work as well as Hemingway’s prose ― nor, for that matter, the prose of David Grann, a staff writer for The New Yorker who wrote a 21,000-word story called “The Yankee Comandante” that the magazine published in May 2012.

Sallah and Weiss structure the beginning of their book just as Grann structured the beginning of his article, with Morgan standing before a firing squad. Both leave the reader in suspense about what happens until near the end.

Grann is conscious of the similarities to For Whom the Bell Tolls, and he points them out. Sallah and Weiss try to write a narrative with similarities of its own to Hemingway, but come up short.

Grann obtained records about Morgan from the FBI, the Army and the CIA. He got unpublished manuscripts from one of Morgan’s comrades-in-arms and a CIA go-between. He also won the confidence of Morgan’s Cuban widow, Olga Godwin.

With an abundance of material and a bafflingly contradictory character as his subject, Grann did an excellent job bringing Morgan to a modern audience.

In a way, this is sad. Sallah tracked down Olga in Toledo, Ohio, in January 2002. He did a three-part series on Morgan for the Toledo Blade. Weiss, an editor at the Blade, became involved in the story at the same time. Olga shared with them her own unpublished 150-page manuscript.

But 12 years passed before they brought out this slender book.

George Clooney has apparently bought the film rights for both the magazine and book versions of Yankee Comandante. There is certainly plenty of cinema potential. If you want the better source material, however, look back at The New Yorker article. (TNS)