But recently, Korean workplaces have been experiencing some major changes, including a generational shift and an increase in female representation.

“The younger generation is more outspoken and not shy about expressing their opinions to their seniors,” said a director at a media company who wished to remain anonymous.

The attitude is somewhat new to him ― a 50-something baby boomer born raised under military-backed authoritarian governments in the aftermath of the Korean War.

“When I was young, I obeyed my superiors, no questions asked,” he said.

As the director pointed out, military culture has played a significant role in shaping the local corporate culture as more men climbed up the social ladder. In Korea, only men are required to fulfill military service.

As these authoritarian leaders took up top positions in the office, the gap widened between the baby boomers and younger employees who were more influenced by democratic values.

“Due to the hierarchical corporate culture, most office workers tend to refrain from speaking up or standing out,” a 26-year-old banker told The Korea Herald. 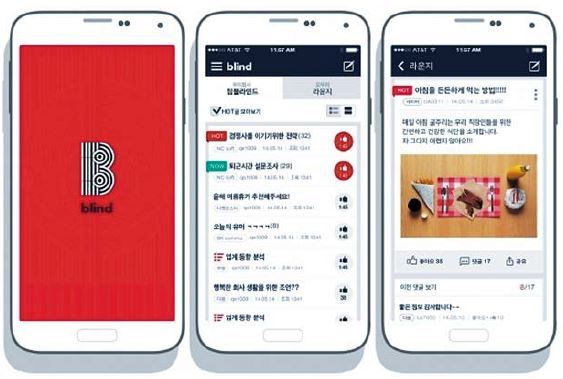 The lack of such face-to-face communication has led the younger generation to flock to Blind, an anonymous gossip application launched in 2013.

As the Korean version of Secret, a similar app launched in the U.S., Blind, has become a hit among young office workers seeking candid communication and sympathy at work.

“Through this app, we can freely talk about our seniors, colleagues, work-related stress, salaries and even labor unions,” the young banker said.

Access is offered only after the user is verified, and the posts are strictly encrypted for security, according to app developer Teamblind.

“So far, most of the users are in their 20s and 30s,” noted Jung Young-joon, CEO of Teamblind.

This means the app can provide a much-needed reality check for superiors, but may also perpetuate the generational gap, as seniors are less likely to join the conversation, according to critics.

Working in a society guided by Confucian values, Korean women have long been underrepresented in the business world.

When Choi Kyung-hee, a 52-year-old banker, began her career at a bank 30 years ago, it was common for women quit once they got married or had a child.

Furthermore, it was rare for women to land decent jobs in the first place, which explains the glaring lack of female executives today.

Women make up merely 2 percent of executive positions at the 10 largest Korean corporations, according to data compiled by CEO Score in 2013.

“In recent years, the gap between men and women has narrowed in terms of income and opportunities for promotion,” said Choi, who manages a bank branch in Seoul.

The changes, however, do not appear to be equally felt among young women.

“Women are still undervalued at work, and are forced to leave their jobs if they attempt to take maternity leave,” said Shim Soo-mi, 30, an office worker for an engineering company.

“Realistically, the office culture will remain unchanged unless the men who are used to male-oriented ways retire.”

However, some critics believe that as many women still leave voluntarily to have families, it is unfair to say that companies are not giving them a fair chance.

A top-down office culture also has its merits, they say.

“The military office culture is at times too rigid, but a strict chain of command can do wonders in times of crisis,” said one 40-something office worker.