According to the National Tax Service, the average yearly income of singers rose 72.2 percent in three years between 2010 and 2013, by far the sharpest hike among all Korean celebrity groups. 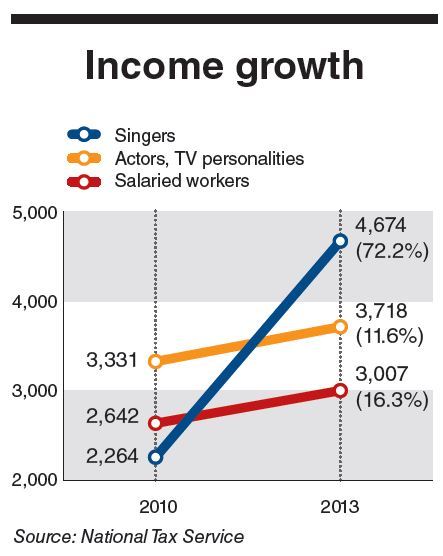 Over the same period, the average for all celebrities ― including singers, actors and other public figures ― grew by just 24.3 percent, from 31.82 million won in 2010 to 39.56 million won.

Actors, in particular, reported a mere 11.6 percent increase in their average earnings, which stood at 37.18 million won in 2013.

Experts attribute the sharper hike in singers’ wealth to the increased focus on revenue-generating activities overseas by K-pop stars.

A small number of actors may have taken home fat paychecks after landing major advertisement contracts, but in general, the average actor does not have the typical earning potential to match the climbing revenues earned by singers performing at K-pop concerts and tours, an entertainment industry insider said.

The official also noted that the average income of singers may seem like a shockingly low salary when thinking of celebrities, as a huge chunk of a K-pop act’s earnings is allotted to its managing agency and also split among members.

The growth in average income doesn’t necessarily mean that Korean singers are in general better off now, critic Kim pointed out.

“Hallyu has deepened the polarization of earnings among Korean singers,” he noted.

Over the past few years, K-pop has boosted its global music market prowess and continues to expand its fan base on a more internationally sustainable level.

Last year, Forbes Korea revealed that the highest K-pop earners in the first half of 2014 were none other than the powerhouse hallyu stars of Super Junior, Girls’ Generation, Big Bang and 2NE1. All four acts are well known for their tremendous popularity among Asian fans, notably the Japanese and Chinese. These stars spend a large part of their time outside Korea, promoting their album and holding large-scale concerts throughout Asia.
Not indicative of each member’s yearly income, though, Super Junior managed to rake in nearly 31.4 billion won in the first half of last year, followed by Girls’ Generation at 30.3 billion won, Big Bang at 29.4 billion won and finally 2NE1 grossing nearly 27.5 billion won.

In the first nine months of 2014, the three major K-pop labels ― SM Entertainment, YG Entertainment and JYP Entertainment ― all reported record-high profits. The three are scheduled to report their fourth-quarter results in the coming weeks, with some analysts forecasting a continuation of the record-earning streak.