Unlike chess where you make your move to attack the opponent by destroying the pawns and knights to capture their king, baduk is more about surrounding a larger area of the board so that the opponent is basically hemmed in, making it impossible for him or her to make the next move.

This is a game that calls for players to see the bigger picture, while at the same time thinking twice before making each move. The player must be acutely aware of the value of each stone, and come up with a creative strategy to connect the stones in order to win.

This process of creating something from nothing somewhat resembles how businesses are managed.

So could it be a coincidence that baduk is known to be the favorite pastime for many a well-known business tycoon in Korea.

The Korea Herald Investigative Team has delved deeper into the topic to learn about the superrich whose business acumen was partially shaped by this game of brains and strategy.


Strategy based on knowledge of the situation

There are many baduk enthusiasts in the pan-LG Family, including LG Group chairman Koo Bon-moo and LS Future Center chairman John Koo.

The former is known to play the game with professional players at the company’s Gonjiam Resort in Gyeonggi Province from time to time, and the latter is an advanced player with an amateur rank of the 6th Dan. 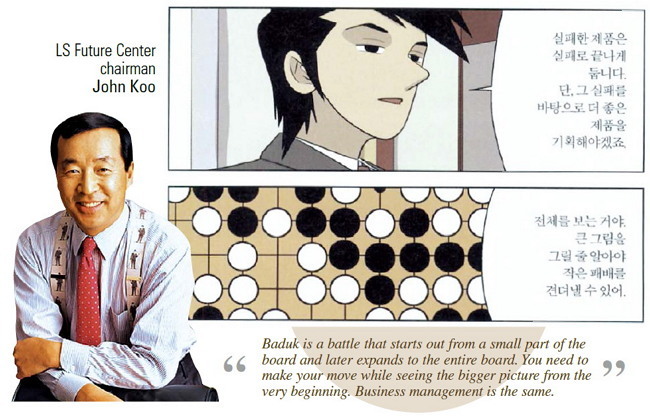 “Baduk is a battle that starts out from a small part of the board and later expands to the entire board,” said John Koo.

“You need to make your move while seeing the bigger picture from the very beginning. Business management is the same.”

Koo has been making contributions to the domestic baduk industry through several activities such as sponsoring young baduk players since 1997, and establishing in-house baduk tournaments at both LG and LS Groups.

He has also promoted activities outside of Korea, such as sponsoring the Baduk Championship in Vietnam since 2011, and hosting the LG Baduk Tournament in Russia.

Another person who applied the philosophy of baduk to business management is AhnLab’s former CEO Ahn Cheol-soo, who is now a politician. 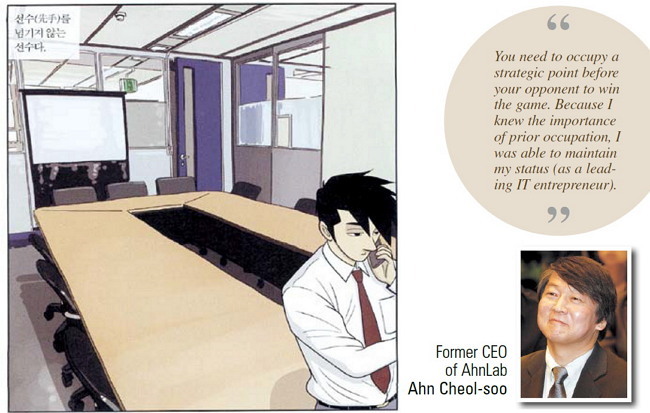 Ahn wrote of the principles of business management that are reflected in baduk in his book “Spiritual Showdown” (2001).

“Baduk is about focusing on the whole rather than partial benefits. Business or even life, in the end, is a long battle, just like a game of baduk,” said Ahn.

“You need to occupy a strategic point before your opponent to win the game. Because I knew the importance of prior occupation, I was able to maintain my status (as a leading IT entrepreneur).”


Reflect upon yourself before striking

In January 2009, former President Lee Myung-bak called on the leaders of local financial circles to invest more in the Korean economy. This was when the national economy was struggling to stay afloat amid a subprime mortgage crisis stemming from the U.S.

SK Group chairman Chey Tae-won reacted by referring to one expression in baduk. 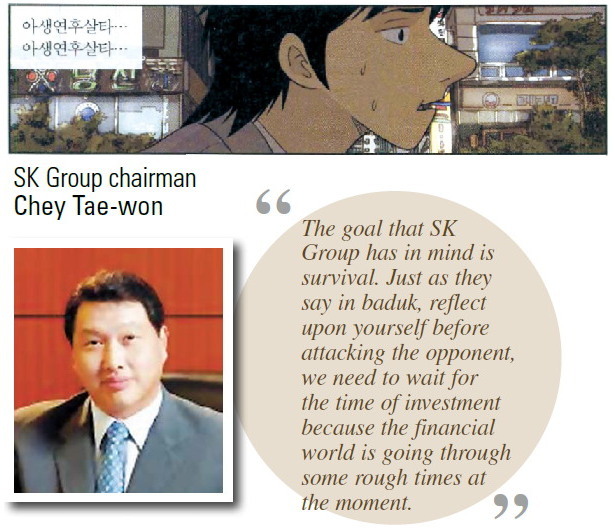 “The goal that SK Group has in mind is survival,” said Chey at the time.

“Just as they say in baduk, reflect upon yourself before attacking the opponent, we need to wait for the right time to invest because the financial world is going through some rough times at the moment.”

A single, well-strategized move can determine the winner of the game in baduk, which is why decision-making is crucial at every step of the way.

Samsung Group directors on several occasions were urged to sit in on lectures from Jung Soo-hyun, professor in the Baduk Studies Department at Myongji University.

“You constantly have to make decisions when placing stones in baduk. In order to make a good decision, you need to have a definite goal, predicting the results for each alternative of your decision-making,” said Jung.

“If you feel threatened by a new enemy, you need to change your strategy.”

Samsung Group chairman Lee Kun-hee has also spoken of his business philosophy based on baduk. 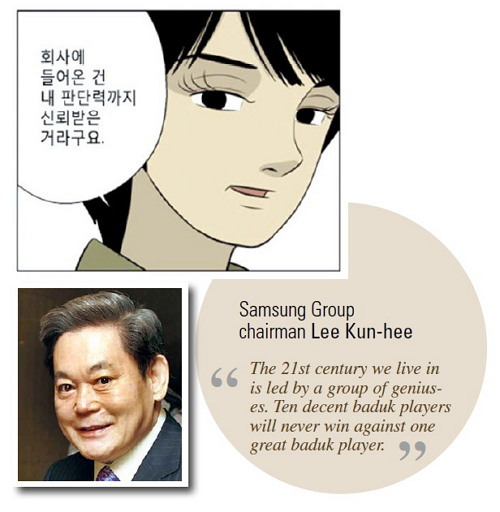 “The 21st century we live in is led by a group of geniuses,” said Lee during the presidential board in 2002. “Ten decent baduk players will never win against one great baduk player.”

His comments were aimed at emphasizing the importance of attaining and grooming superhigh-caliber talent who could produce satisfactory results in a company.