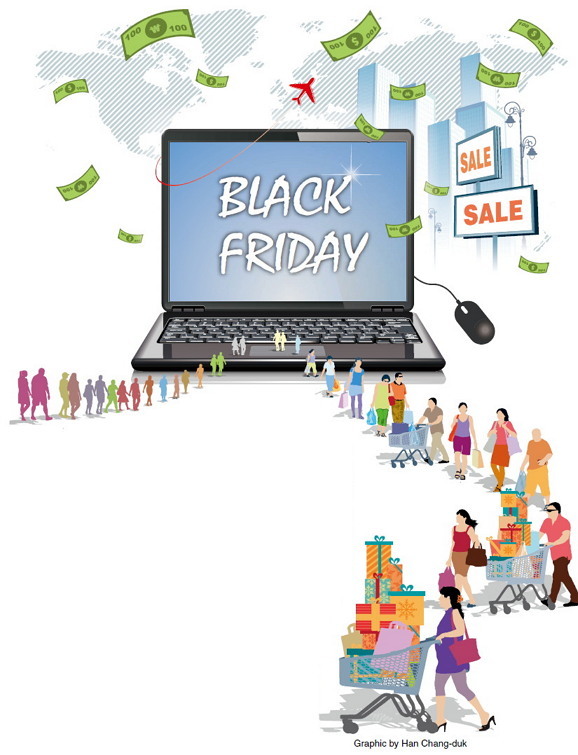 “The price was 20 to 30 percent cheaper than in Korea. Free shipping was also available,” he said. “Among other things, it’s great to feel like a young trend-setter because overseas shopping was unthinkable when I was young.”

In the era of one-click Internet shopping, Korean customers are flocking to global online shopping sites. For cheaper deals, they are buying directly from foreign e-retailers, rather than through Korean importers.

In the past, there were some language and shipping issues. But now foreign online shopping malls are also upping efforts to attract big spenders from Korea as they offer Korean language services and free international shipping.

As of October, the nation’s overseas direct shopping purchases totaled 1.35 trillion won ($1.22 billion) in sales. After this week’s Black Friday, the figure is expected to hit a record 2 trillion won this year.

The new shopping frenzy is still driven by fashionable but budget-conscious young mothers, who discover the virtue of online shopping while looking for cheaper deals on Ralph Lauren T-shirts and Stokke strollers.

Over the years, shopping items have also become more diversified, to include cosmetics, vitamins and home appliances. A wider group of customers, including middle-aged men, are joining to increase sales of TVs and equipment for golf or trekking.

But local manufacturers and retailers appear perplexed over Korean people’s unexpected spending outside the country. Because some Korean-brand products are sold at cheaper prices abroad, doubts are also rising about whether they are charging too much on their home turf.

With the Black Friday shopping weekend starting, Korean on- and off-line retailers are offering deep discounts to lure back the customers who would be sitting in front of PC monitors to look for hot deals.

In the meantime, some local retailers are turning eyes to the growing number of Asian customers who are increasingly visiting Korean online shopping sites to buy beauty and fashion items.

As the Korean pop culture is fast expanding its presence across Asia, Hallyu fans, mostly from China, are willing to open their wallets to buy products worn by their favorite celebrities.

Industry watchers predict that the free trade pact recently signed between Korea and China would become a boon for both countries to accelerate online trading between the two nations in the near future.