“I wanted to do this first,” La Cave du Cochon’s Lim, 36, said of the French head cheese known as fromage de tete.

While there, he also worked in the charcuterie division of famed chef Daniel Boulud’s multirestaurant empire.

Armed with all that amassed know-how and the still lingering memory of making pate as a chef de partie at Boulud’s db Bistro Moderne years ago, Lim opened La Cave du Cochon in early October.

Located on the second floor of a building near Seoul’s Dosan Park, La Cave is just like it sounds, cavernous and intimate.

In one corner, small arched nooks await diners who want to lean in and share small plates in relative privacy.

Marble tables populate the center of the eatery, while at the bar, with its broad wooden counter, one can glimpse the heart and gut of Lim’s latest operation.

Housemade terrines and pates ― mouthwatering presentations of molded meat, ready to be cut into thick slices ― beckon from their perch inside a glass showcase at the counter.

Lim oversees all the charcuterie at La Cave, no easy feat considering he also oversees the kitchen at his first restaurant, L’Espoir du Hibou, which opened in Samseong-dong approximately six years ago and is currently located in Cheongdam-dong.

Lim grew a reputation for the French cuisine he showcased at L’Espoir and his handiwork at La Cave backs the very reputation that proceeds him, as is well exemplified by his fromage de tete.

“Meat from the pig’s head is brined for a quarter of a day, boiled, cut into cubes, put into a mold with whole grain mustard,” said La Cave manager Kwon Hee-soo, 25.

That thin layer of whole grain mustard over the top of the fromage de tete is key, adding a grease-cutting pop to a hedonistic chessboard of delicious bits of pork, in all its varying textures and flavors.

“It is said that one can taste a whole pig just by tasting the meat from its head,” said Lim, capturing the overall charm of head cheese.

All Lim’s pork-based charcuterie, like the fromage de tete, is crafted from black pig from South Korea’s Mount Jirisan, because, Lim says, “it is very tasty.”

Jirisan black pork is used to make La Cave’s pied de cochon terrine, pate monsieur, pate de campagne and the picturesque pate en croute, which is covered in a pastry shell crust and uses pork jowl and dried cherries soaked in brandy to create a delicacy that tastes like a savory-sweet pie.

Dried figs soaked in sherry produce that same sweet-savory effect in the pate de canard, which is further elevated by a sizeable hunk of foie gras embedded in the center of all that tasty duck breast and pork.

Then there is the Lucullus de Valenciennes, with its layers of black truffle, foie gras and smoked beef tongue.

A striated block that delivers varying degrees of rich creaminess and smokiness from the beef, liver and truffle, Lucullus de Valenciennes is addictively decadent.

In addition to terrines and pates, there are also housemade sausages, including the establishment’s winter-friendly merguez, a sausage that is crafted with lamb, cumin and harissa at La Cave.

The sausage, which is dense and flavorful, is served over a thick, almost starchy bed of housemade hummus, topped with fluffy, lemon-infused couscous for a rib-sticking and hearty dish that begs for a glass of red wine.

While the menu looks fairly complete, there is still something missing ― rillettes, essentially delicious meat spreads, which go great over bread.

“We are working on it,” said Lim, promising to add rillettes to La Cave’s repertoire. 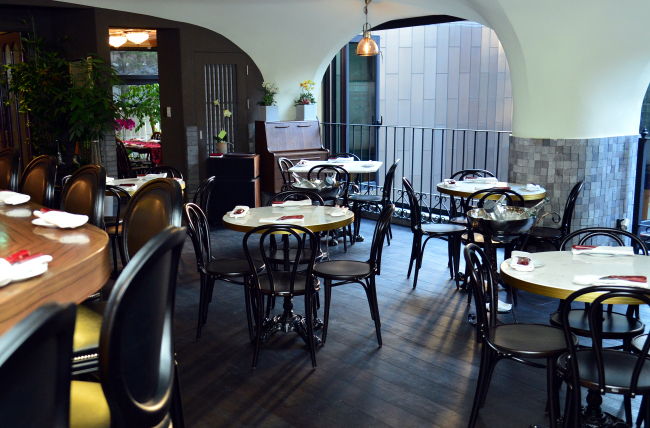