The government is scrambling to shore up the falling birthrate, a threat that could jeopardize Asia’s fourth-largest economy, which is saddled with a rapidly aging population.

What many policymakers have failed to tackle is the underlying problem that forces Koreans to delay or forgo having children.

“I don’t think marriage is an option for me right now,” said Kim, who currently works as a part-time tutor. “Having kids is just not even thinkable. I can’t even take care of myself right now. I am not sure if I deserve to be happy at this moment.”

After finishing her master’s degree in biology, Kim, at age 26, realized she didn’t want to be a scientist. She started looking for jobs ― a full-time position that would pay her enough to move out of her parents’ house and start a family of her own ― but never found one.

During one job interview, for a marketing position at a big firm, Kim was told that she was “too old” for the company’s entry-level positions.

Kim, who lives with her parents, is considering going back to school, or even overseas for job opportunities. She is putting off marriage until she gets a full time job.

“If you are not working full time and want to be married, you have to have wealthy parents,” she said. “That’s just not the case for me.”

Kim is one of many young South Koreans who experts think are a key factor behind the country’s critically low birthrate ― which Rep. Park Yoon-ok last week described as a “a bigger threat to the country than nuclear weapons.”

The country’s fertility rate last year, at 1.18 children per woman, is exactly the same as it was in 2003, proving that the demographic policies the government has implemented since 2006 have failed. 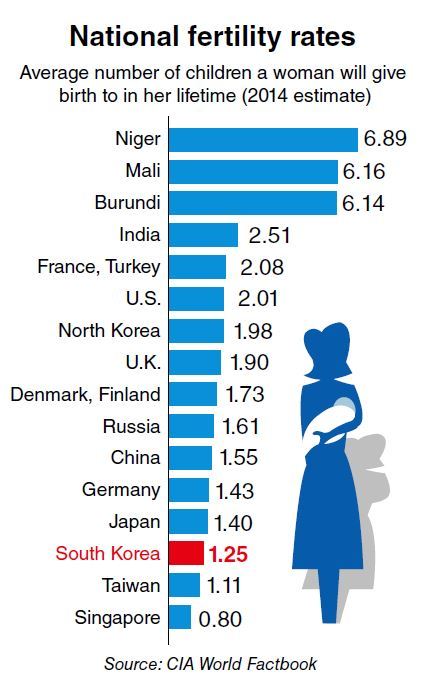 A recent government projection even showed that South Koreans could even go extinct by 2750 if the current trends continued.

One of the biggest reasons behind the policy failure is a lack of programs for young, single Koreans who put off marriage, said scholar Kim Young-nam at Korean Women’s Development Institute.

“Most of the government’s population policies (to boost fertility rate) have been focusing on married couples only,” she told The Korea Herald.

“And that obviously didn’t work. The fertility rate issue is very complex. You can’t change this by simply giving extra money to those who are already married.

“The birthrate is low here because people either get married late or don’t get married,” she continued. “And the reason behind that has a lot to do with the housing and employment situation the young people face today. Many feel that they are not financially stable enough to get married or raise a child.”

Cho Sung-ho, an associate research fellow at the Korea Institute for Health and Social Affairs, found that those who are employed in full-time positions had a much higher chance of being in relationships than Koreans who are either unemployed or working in contract positions last year.

Only about 30 to 40 percent of single South Koreans aged 18 to 49 were dating as of 2013, although most unmarried Koreans wished they were in relationships, Cho found.

“The low fertility rate also has to do with lack of dating among single Koreans. A lot of single Koreans are not dating and one of the biggest reasons is their financial concerns,” he told The Korea Herald.

“But it’s questionable if it is appropriate for the government to get involved in the dating lives of its citizens. Some countries do. The Singaporean government, for example, offers a matchmaking services (in its effort to boost fertility rate).

“I think major issue that has to be dealt with is the job situation here. There should be more full-time positions that would allow people feel secure enough to build a family of their own.”

As of last year, only 41.6 percent of South Koreans aged 15 to 29 were employed, according to Statistics Korea. The country’s youth employment rate in 2012 was 40.4 percent, much lower than the OECD average ― which was 50. 9.

South Korea also had the lowest employment rate of women with post-secondary education degrees, at 61.2 percent, in 2012. The OECD average was 78.6.

“I hear young people in Scandinavian countries have children in their early 20s, when they are still in school,” scholar Kim from KWDI told The Korea Herald.

“Having babies in your early 20s is doable in such countries because their welfare programs help you go through it. But here, you have to wait and work for it until you are ‘ready’ to have a child. It is all on you.

“It means finishing school, completing your military service, finding a secure job, finding a spouse, and finding housing that is big enough to bring up a child in. And this can take a very long time.”

Kim also said working on this issue should not be just about “increasing numbers.”

“There are so many factors that affect the country’s fertility rate,” she said.

“It shouldn’t be about raising the rate from 1.19 to 1.30. The whole system of society has to change to fix this problem.”

The scholar also said that young Koreans today, especially women, should not be called “selfish” for choosing not to have children. Mothers back in the 1960s and ’70s, in spite of the higher level of poverty, had much more support in raising their children because they lived in big, extended families, she explained.

“Most of them were housewives, and there were other women at home to help out,” she said. “Today, they have to work and raise their kids at the same time. And there isn’t much support available. Raising a child doesn’t just require money. It very often requires other people to physically be there for your child.”