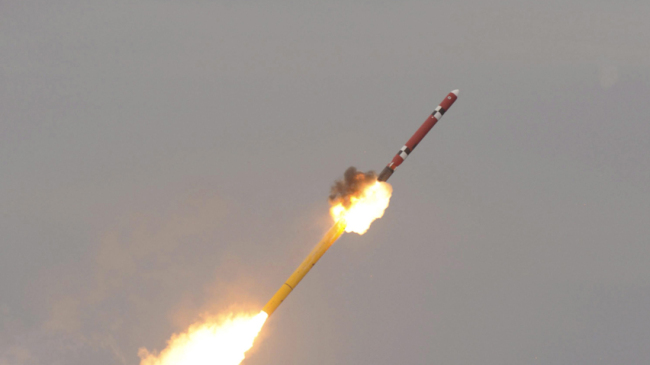 The projectiles were fired between 7 and 7:30 a.m. from a site in its eastern border town of Wonsan. They were presumed to have landed in the East Sea after flying some 210 kilometers, according to the JCS.

"The military is staying vigilant and paying attention to movements of the North Korean military in case of an additional launch," a JCS officer said.

While the military "is analyzing what type of missile the North launched and what lies behind its test-firing," the officer said that it is presumed to be a new type of tactical missile.

The short-range projectiles that the communist country test-fired last month and earlier this week from Wonsan and the northwestern province of Chagang bordering with China respectively were "novel tactical missiles," which are different from its existing KN-02 missiles and 300-millimeter multiple rocket launcher, the officer said.

"We have concluded that the short-range missiles fired on Aug. 14 and Sept. 1 were novel tactical missiles," the officer said.

The military presumes that the ones fired on Sunday are the same ones as well, the officer said.

Sunday's firing marked the 19th time that the bellicose neighbor has launched missiles or rockets this year, with the number of projectiles fired totaling 111, according to JCS data.
(Yonhap)