By Lee Woo-young
Published : Sept 5, 2014 - 20:48       Updated : Sept 5, 2014 - 20:51
Family members dressed in traditional hanbok gather for the ancestral rite early in the morning on Chuseok, which falls on Aug. 15 on the lunar calendar. Dozens of dishes are laid out on the table for the rite, prepared by female family members over several days. After the ceremony, family members eat breakfast together. They make up for living apart in different regions by spending time together making songpyeong, a half-moon-shaped rice cake eaten during Chuseok.

Such typical Chuseok scenes are not as common as they were decades ago. Rather than following traditional customs, more people travel abroad during the long holiday. Parents in rural villages visit their children in cities to free them from having to make the burdensome journey home along congested and stressful expressways.

According to a recent survey by Duo, a matchmaking agency, more than 78 percent of 142 married respondents said they would not visit their parents this Chuseok. They cited four reasons: Their parents do not put pressure on them to take the long trip home (31.5 percent), they have already made other travel plans (29.7 percent), they just want to take a rest (14.4 percent) or they don’t want to have to deal with the heavy traffic during the holiday exodus (10.8 percent). 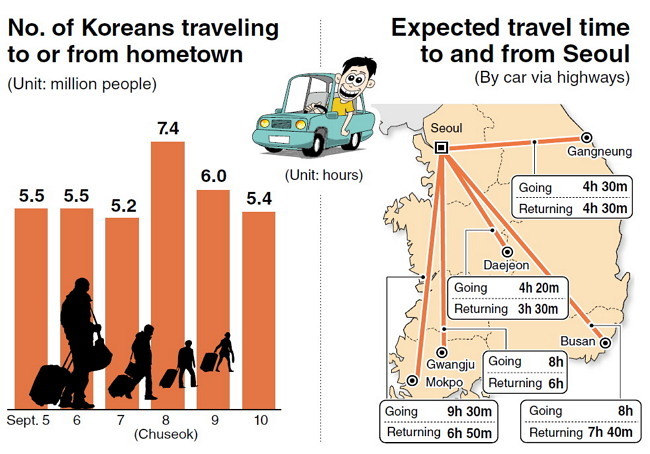 Asked what they planned to do if they were not visiting their parents, they said they would travel (30 percent), eat out (28.8 percent), just rest at home (21.6 percent) or do other leisure activities (9 percent). The survey polled married people in their 20s and 30s from Aug. 24 to 27.

“Traditional Korean family values are changing in modern society. People do not regard ancestral rites and other traditional customs highly anymore. They scale down the traditional practices to enjoy the holiday as they wish to do,” said Kim Yu-kyung, research fellow of the Korea Institute for Health and Social Affairs, a think tank for policy recommendations on health care, family and social welfare.

“Korean families have become democratic. Families are no longer centered around parents. Parents and children have become mutually independent. Each of the two generations choose to enjoy the long holiday in its own style,” Kim explained.

It’s also a sign that the modernization of Korean society is weaning its members off strict Confucian values that have weighed down family members, especially women, who are supposed to cook various ritual foods.

“My mother-in-law suggested we get together a week before the Chuseok holiday. It would have been a huge pressure on me if I had had to prepare food for Chuseok. But it has been an easy and stress-free Chuseok since we all ate out and just had dessert at home. I’m thinking of a trip next year,” a member of Jinheemom, an online community of young mothers, wrote in a post.

Still, Chuseok and Lunar New Year’s Day, the two most important holidays in Korea, are highly stressful for many women. The demanding job of preparing diverse ritual foods and meals for in-laws who are gathered for the holidays spawned the medical term “traditional holiday syndrome,” which can consists of carpal tunnel syndrome, with pain in the nerves around the wrists; digestive disorders; and dysmenorrhea, according to Ewha Womans University Medical Center.

“The symptoms occur around traditional holidays. It’s easy to ignore them because those symptoms are just temporary. In the worst case, symptoms may develop into serious diseases,” said Jeon Hye-jin, professor of family medicine at the medical center.

Kim of the KIHASA said stress from traditional holidays would decrease as families become more egalitarian and democratic.

“Korean families are in a transition, from following Confucian values to being more democratic and individualistic. The meaning of Chuseok will change as younger generations get older,” Kim said.