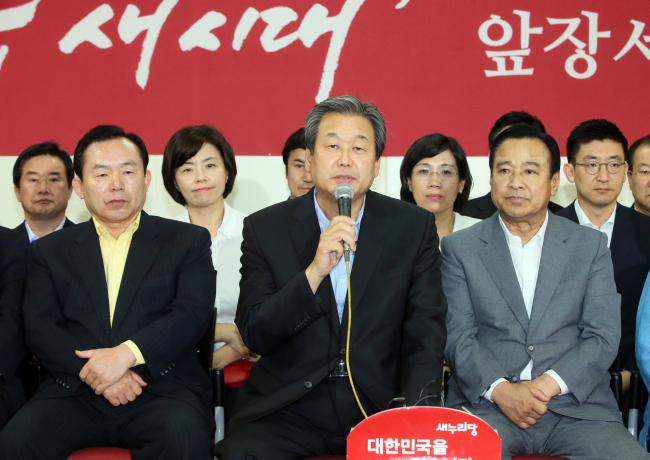 The ruling Saenuri Party swept Wednesday’s parliamentary by-elections, taking 11 of the 15 constituencies to raise its head count in the 300-seat National Assembly to 158.

The landslide victory is expected to consolidate Saenuri Party chairman Rep. Kim Moo-sung’s hold on the ruling party. The leaders of the main opposition New Politics Alliance for Democracy, in contrast, are expected to step down to take responsibility for the massive loss. NPAD cochairmen Reps. Ahn Cheol-soo and Kim Han-gil are expected to make the announcement Thursday.

Despite projections that the by-elections would be a close match between the two main parties, Saenuri Party candidates won by a comfortable margin in 10 of its 11 victories.

The only exception was for Seoul’s Dongjak-B seat, where Saenuri Party’s Na Kyung-won narrowly beat the minor opposition Justice Party’s Roh Hoe-chan by fewer than 1,000 votes.

“The people will be moved by the Suncheon and Gokseong residents taking the first step in changing (Korea’s) politics and regional (political) structure,” Lee said after his victory was confirmed.

The Jeolla provinces in Korea’s southwest have long been a stronghold of progressive parties, while the Gyeongsang provinces in the southeast form the powerbase for the conservatives.

In contrast to the ruling party, all four regions taken by NPAD candidates -– Gwangju’s Gwangsan-B, Gyeonggi Province’s Suwon-D, and Naju-Hwasun and Damyang-Hampyeong-Younggwang-Janseong in South Jeolla Province -– were previously held by the party.

The failure of the NPAD’s strategy of fielding heavyweights to encroach on Saenuri Party territory is likely to deal severe blows to losing candidates Sohn Hak-kyu and Kim Du-kwan.

Sohn lost the Suwon-C seat to political rookie Kim Yong-nam of the Saenuri Party, while Kim was beaten by Hong Cheol-ho in Gimpo.

“The party considers (the election results) as the people reprimanding us for failing to achieve clearer innovation and in being more responsible.”

With 15 seats up for grabs, the elections were considered a mid-term referendum on the Park Geun-hye administration and critical for political parties to gain the upper hand for the rest of the 19th National Assembly.

Despite the parties’ attempt to sell the by-elections dubbed the “miniature general elections” as a make-or-break opportunity for the country, voter participation came in at 32.9 percent, falling below the 33.5 percent average for by-elections since 2000.

However, the figures for Seoul’s Dongjak-B and South Jeolla Province’s Suncheon-Gokseong constituencies -- the focus of heavy partisan fire -- came in respectively at 46.8 percent and 51 percent.