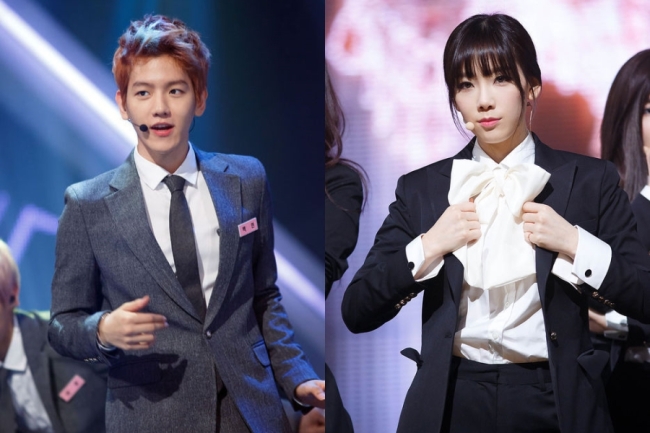 The leader of the K-pop idol group left a message on her Instagram at 11:30 p.m., Thursday, 12 hours after the news went viral. She is thought to have written the message right after she wrapped up a concert in Japan.

“My fans, I know you have been shocked and hurt by me today. I am really sorry that I made you feel what you don’t have to feel. Today’s news (about my relationship with Baekhyun) upset you because I wasn’t cautious enough,” she said.

The 25-year-old idol went on to say, “I know I let you down. You might feel disappointed and mad. You might hate me... I know you have mixed feelings about it. I can accept that. And I want to say sorry. I know (you are hurt) because you have trusted and supported me.” 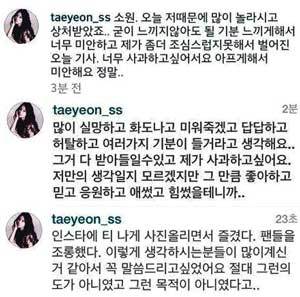 She also talked about the controversy over her previous comments and photos on her Instagram that fans later found relevant to her then-secret lover Baekhyun.

“I have heard many fans saying that I enjoyed posting secret photos that only Baekhyun and I can understand on my Instagram, mocking fans ... but that was not my intention.”

Many fans of the idol couple say they feel “betrayed” rather than happy.

The news came as a great shock, especially to Baekhyun’s fans, due to his latest post on EXO’s official website affirming his willingness to focus on EXO’s activities without having a girlfriend.

Earlier in the day, rumors surfaced that Taeyeon and Baekhyun had been dating for four months after Korean online entertainment news outlet Dispatch unveiled photos of the two in a car, supposedly on a date, that were taken around dawn near EXO’s home in Seoul.

Taeyeon reportedly headed to Baekhyun’s dormitory, located in eastern Seoul at 2 a.m. to pick him up. They parked on a side road, where the couple enjoyed time together.

“They have been close as a senior and junior, but recently they started to have feelings for each other. The relationship is in its early stages,” said an official from the agency.