The figure is up some 30.7 percent from the previous year, suggesting that the SPA market is still in its heyday despite a dull forecast by market insiders.

According to the report, Uniqlo reported 694 billion won in sales last year. The Japanese brand, which launched here in 2006, sold 20.5 billion won worth of apparel in its first year but marked an average of 67 percent annual growth every year since and became the largest SPA brand in the country. 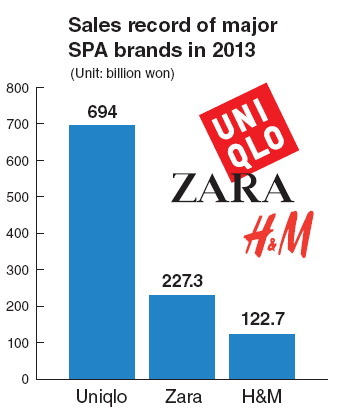 The accumulated sales of the three brands exceeded 1 trillion won, which is about a 30.7 percent jump from 2012’s 765 billion won.

“SPA brands provide the trendiest designs at a reasonable price. For the past four to five years the market showed double-digit growth,” a market insider said.

And the ever-growing market has become the latest darling of not only existing brands but also newcomers such as Joe Fresh, GU and COS, which are slated to be introduced by the end of the year.

Market insider warned that the market is saturating. In fact, Zara and H&M showed 11.5 percent and 36.3 percent growth, respectively ― lower than previous years.

“I don’t see the market growing as fast and loud as it used to. Before, shopping malls hosted SPA brands to draw traffic by giving cheaper rents for better locations. But nowadays, those incentives are moving towards famous or popular restaurants. This means that SPA is not trendy anymore,” he said.