The grounds are neatly manicured. Tree-lined streets full of restaurants and retailers break up the blocks of utilitarian buildings where production lines churn out iPhones, iPods and computers.

In one corner of the compound stands a cluster of apartment blocks, home to some 40,000 employees. There is a hospital and a sports field, a canteen that serves 16,000 people at each sitting. There is a building with a “therapy room” decorated in bright colors, where workers can sit and stare at stickers of cavorting butterflies, or a painting of a stag with bouquets of flowers sprouting from its antlers. Across the hall is a bustling call center where operators man a counseling helpline for employees.

The line between factory and city blurs beneath kilometers of suicide prevention nets. 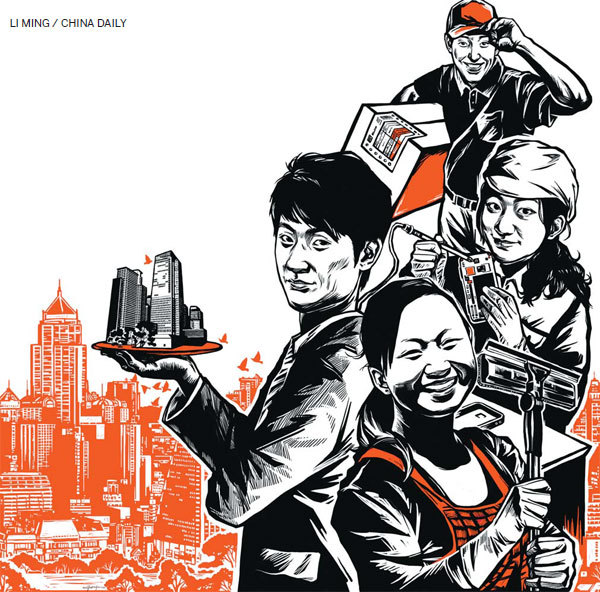 Since 2010, when global media attention fixed on Foxconn following a spate of suicides, the manufacturing giant has rightly or wrongly been held up as a weathervane for working conditions in China.

But whether through corporate confidentiality, or the barriers of culture and language, much about the professional and private lives of Chinese workers remains a mystery even today.

Five years after Time magazine named the Chinese worker runner-up in its annual person of the year award, this special May Day edition of China Daily takes readers inside Foxconn and behind closed doors of businesses across the nation, for a glimpse into the lives of the ordinary people driving the world’s second-largest economy.

And the latest figures released by China’s National Bureau of Statistics show those lives are changing dramatically.

Nothing gleams in building E5, an open hangar-like space with concrete floors. This is not one of the massive production lines where workers assemble shiny finished products for Apple, HP, Nokia, IBM, Samsung, Amazon, Sony and Dell.

Suggested in the shapes of casts and molds is the secretive anatomy of the world’s smartphones and tablets.

Li Guizhen, 32, watches over a row of silent women who delicately pick at components with tiny implements.

Like the vast majority of Foxconn employees, Li is a migrant worker, one of almost 269 million men and women in China who have left their hometown temporarily or permanently to work in the nation’s cities and manufacturing centers.

A devout Muslim and father of two, Li is about 3,000 kilometers from the farm in Xinjiang where he grew up. Beyond geography, the distance can be measured in years and money and lifestyle, a journey from poverty to the doorstep of China’s burgeoning middle class.

“When I was a little kid, my father was a farmer, and we were very poor,” Li said. Now, as a manager in the mold-making production area, he earns more in two months than his father made in an entire year as a farmer.

In another part of the compound, somewhere on the factory line, 21-year-old Jiang Caixia dutifully checks the backs of iPhones for scratches. “I check about 260 per hour,” she said. “I check more than 2,000 phones per day.”

A farmer’s daughter, Jiang got a job with Foxconn two years ago. “I live here inside the factory in a dormitory,” she said.

Her typical workday starts at 8 a.m. She has a 30-minute lunch break, and finishes at about 6 p.m. If there’s a big order in, she works from 8 a.m. to 8 p.m., with the last two hours paid at overtime rates.

Turn the clock forward a decade or so, and Jiang might be Sun Xiaoji, the woman sitting next to her outside the “Foxconn Cafe.”

The daughter of humble farmers, Sun finished high school about 16 years ago and left her hometown in Hubei province to work on the Foxconn production line.

In many ways, 36-year-old Sun represents the changing face of the Chinese worker.

“I never went to college before I came here. But they had a program here at Foxconn. I got a technology degree (vocational qualification) by going to class after work.”

Sun is now an assistant production manager and a mother of two. She makes about 16,000 yuan ($2,550) per month, enough to employ an ayi, or nanny, to help take care of her two children, aged 6 years and 18 months. Shenzhen is now her home. She owns a house in town with her husband, who also works for Foxconn.

The conditions and salary, Sun conceded, weren’t always this good. But she said the catalyst that has defined modern China, rapid change, is now reshaping the lives of workers.

“When I first came here, we didn’t know how to protect our rights,” she said. “If there were extra hours, we were happy to work extra hours. We didn’t know there were laws that say you are not allowed to work over a certain amount of hours. I used to think that working meant I just have to work hard. Now I think I have to work hard, but I also have to feel happy in my work.”

Jiang plays with an inexpensive Huawei handset. She said she couldn’t yet afford to buy one of the more than 10,000 iPhones she helps make every week. Her parents were too poor to send her to a university, but she said she is happy with the work and pay. So is Sun.

“It’s not like what outsiders say, that we are a sweatshop factory,” Sun said.

In February, the day after the traditional Chinese New Year holiday ended, migrant workers lined up outside Foxconn’s gates looking for work ― 20,000 of them, said the company’s spokesman for the Chinese mainland, Liu Kun.

By Joseph Catanzaro and Cai Muyuan