[Weekender] Consumers will become next producers

Market trend analysts are finding that consumers of the 21st century are bolder and craftier than ever before.

“Modisumer” (a combination of “modify” and “consumer”) refers to consumers who invent their own innovative ways to use a product, or combination of products, even if it drifts from the manufacturer’s intentions.

“Consumers today have very specific and subtle needs,” said professor Jeon Mi-young of Seoul National University’s Consumer Trend Center. “What better way to meet these demands than for consumers to tailor their own products?”

While modisumers are often more or less focused on inventing new cooking recipes, there had previously been similar notions but under different names ― such as “prosumers,” for instance, which combines “producers” and “consumers.”

“It doesn’t really matter what name you give it because the general concept is not new,” said Jeon.

“The important thing is that it’s now beginning to spread rapidly as more consumers wish to participate in the production process and also as social networking services and other online platforms have made it significantly easier for them to share their ideas,” she added. 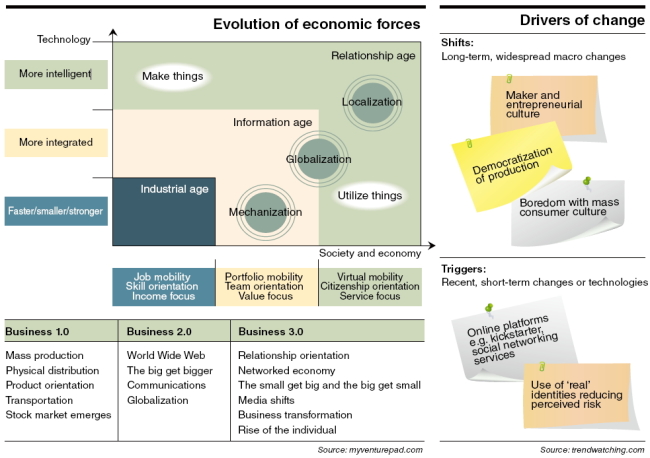 Likewise, history reveals that technological advancements have always been interrelated with economic and societal progressions.

If the industrial age sparked a period of mass production and distribution, the information age ― characterized by globalization and the introduction of the World Wide Web ― granted an era of communication and integration.

The Millennium Project, a global think tank, explains that the growth of mobile shopping, social commerce and social media will be game changers for future consumers, if they are not already.

So it appears, then, that the world is now at the brink of a new era: the “New Industrial Revolution,” involving consumer trends that are based on creativity and innovation.

“Even commercial manufacturing itself has become digital, networked and increasingly open ― just like the Web,” Chris Anderson, an American author and former chief editor for Wired magazine, explains in his book, “Makers.”

“As a result, global manufacturing can now work at any scale, from units of one to millions. Customization and small batches are no longer impossible ― in fact, they’re the future,” he says.

According to Anderson, just as mass production has once been a revolutionary change, tools such as 3-D printing may prompt another transformation in consumer patterns by allowing the consumer end to be fully responsible for designing and generating customized products.

The benefits of such trends are also very clear.

Lee Seung-il, a chief researcher at LG Economic Research Institute, says that shifting away from mass production and consumption can help avoid an oversupply of products that may ultimately lead to deflation.

According to Lee, the fundamental objective of mass production and consumption is to make things as cheap as possible for as many people as possible, but such method also holds the risk of creating products with shorter life cycles.

He also says that because consumption has already long expanded into other sectors like the service industry, it will sooner or later have to be driven by personalized products for individuals.