Novel set in a country stranger than fiction

In fact, the world seems to hunger for information on North Korea.

When Adam Johnson, a professor of creative writing at Stanford University, included a memoir by a North Korean defector in the syllabus for an undergraduate class in narrative technique in 2004, he could not have known that he would go on to win the Pulitzer Prize in 2013 for his own fiction on North Korea.

Although Johnson, who also taught a class on trauma narratives, knew that the hallmarks of a trauma narrative would be there, “The Aquariums of Pyongyang: Ten Years in the North Korean Gulag” by Kang Chol-hwan opened his eyes to a whole new world.

Kang was 9 years old when he was sent to the gulag with his family after his grandfather was charged with treason. The family was eventually released and Kang defected to South Korea.

Johnson spent a year reading a dozen books on North Korea that year.

“I was disappointed that there was little human story. It was hard to find a human dimension in those books,” Johnson recalled in an interview with The Korea Herald on March 6, during a 90-minute cab ride from Songdo, where he had just held a discussion on his book, “The Orphan Master’s Son,” with high school students.

He was in Korea for the release of the Korean-language edition of his book, a fiction set in North Korea featuring a protagonist, raised in an orphanage by his father, the master of the orphanage, who eventually finds himself, a self that thinks for itself and acts for itself.

His favorite book was “Nothing to Envy: Ordinary Lives in North Korea” by Barbara Demick, former Seoul bureau chief of the Los Angeles Times. The book focuses on six North Korean defectors’ experiences during the great famine from 1996 to 1999. He then discovered that the stories that he wanted were available online: Stories by missionaries, NGO workers and journalists. 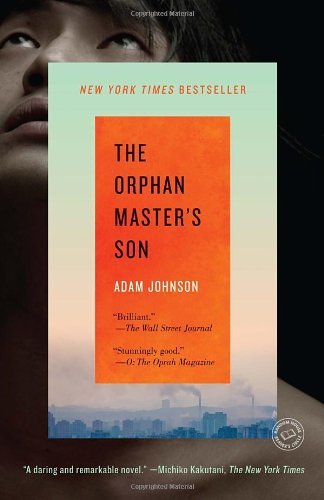 “Stories of defectors were really powerful,” said Johnson, but he realized that he was getting a “skewed view” of North Korea.

“People don’t defect unless they have to,” he said.

Not finding stories of normal people “turned me from a reader to a writer,” he said. “I was full of these narratives and I felt like I had a stone in me.”

He also started reading North Korean propaganda. “I still read it every day. ‘What is Kim Jong-un up to today?’”

“It is silly, very boring, evil, so angry and bellicose,” Johnson said of the propaganda churned out by the North Korean regime.

“The thing that I hate about it is that there is lack of utility. It doesn’t help you learn or know anything,” he said.

“There are about 18,000 videos by North Korea on YouTube. I am the sort of guy who can watch a 10-minute video about a frog farm, an ostrich farm,” he said with a chuckle as he shed light on the subject matters of the North Korean video clips on YouTube.

Johnson, who received his doctoral degree on the evolution of the narrative of the 18th-century novel, learned from reading North Korean propaganda that narrative works in the opposite way as in the West.

“In the Western narratives, people are encouraged to be the central characters in their own lives. There is growth, meaning, change, wisdom. In North Korean propaganda, the Dear Leader is the main character. The rest are supporting characters. There are 23 million supporting characters. What you want is hindrance to what you are supposed to become. You are given a role and you play it,” he said.

“It turned everything I knew about narrative art on its head. I wanted to play with that,” said Johnson.

Once he started writing, he became hooked. At the same time, he felt very alone. “Who am I to undertake the story?” Johnson recalled asking himself. “I wondered why aren’t more people writing when this is the most voiceless society in this world?”

He wrote to Pyongyang Polytechnic, answering an online advertisement for a professor, and he wrote to Kim Il-sung University and offered to host one of their students for a year ― without even asking his school first.

Johnson found a mentor for his book in a Korean professor of international relations at another university. He was born in the North and became an orphan during the Korean War. At the age of 11, he found himself in Seattle, Washington. He went on to become one of the founders of Holt International, an adoption agency, has been to North Korea 14 times, and worked with orphanages in the North.

“His story was so moving. I knew I was going to have an orphan in my story,” he explained.

Johnson’s seven-day visit to North Korea as a VIP tourist in 2007 ― made possible when his mentor arranged to have Johnson meet the North Korean ambassador to the U.N. and vouched for him ― equipped Johnson with the landscape and details.

“There was a lot of flooding in the South, and the North Korean newspaper reported that Kim Jong-il had sent sandbags to the South,” he said, detail that found its way into the book.

He also took a lot of propaganda straight from newspapers.

During the trip that took him to Pyongyang, Mount Myohyang, Gaeseong and Panmunjeom, he did not attempt to talk to the locals. “My great fear was I would harm anyone,” he said.

“Truth and lies are kind of one in the North, I think,” Johnson proffered. “I am an outsider and can see things freshly.”

When he started writing, it was not clear how his protagonist would evolve.

“Fiction writing is closely related to jazz, like improvisation,” Johnson said of his writing process. “I just started wandering.

“I was writing another book that was an important book at the time, but I liked this and found myself cheating,” he said.

The first problem he encountered was giving name to his character. “I did not know what to call the protagonist. I didn’t know Korean names,” he said.

So he started out with Hong Gil-dong, “meaning somebody or nobody,” he explained.

In the first part of the book, the protagonist takes the reader through different parts of North Korea. “The character moves about in landscape I read about ― collective farms, fishing boats,” he said.

The main character’s name is Jun Do ― like John Doe, Johnson explains. “In English, John Doe is the notion where you have a person but not the identity,” he said. In Johnson’s fiction, Jun Do is eventually allowed to define himself: Jun Do starts as a very North Korean character, doing what he is told, but by the end of the book, he has turned into a Western character, thinking and acting for himself.

Writing outside one’s own culture and experience can do great harm, Johnson noted. “But my intentions were good. I was worried that it would fall short and not capture. But it felt real to all my research,” he said.

“We won’t know until they can tell their story.”

Meanwhile, “The Orphan Master’s Son” has been translated and published in 29 countries, attesting to the world’s hunger for stories about North Korea, a hunger driven largely by the very limited access to the country.