As the search continues, the authorities deployed 171 ships, 29 aircraft and scores of divers from 6 a.m. Thursday.

The rescuers are also considering injecting oxygen into the capsized ship to supply air to those who may be trapped inside.

Although rescuers worked through the night, little progress was made in locating the missing. As of 10:16 a.m., the death toll stood at nine, while the number of people rescued inched up to 179 from about 160 the day before.

Of the nine, five are students of Danwon High School in Ansan, Gyeonggi Province, and two are teachers who were accompanying the students on their school trip to Jejudo Island. The eighth is 22-year-old Park Ji-young, a member of the ship’s crew. The recently identified man was found to be 29-year-old Kim Ki-woong. Of the 475 people on board, 329 were Danwon High School students and teachers. 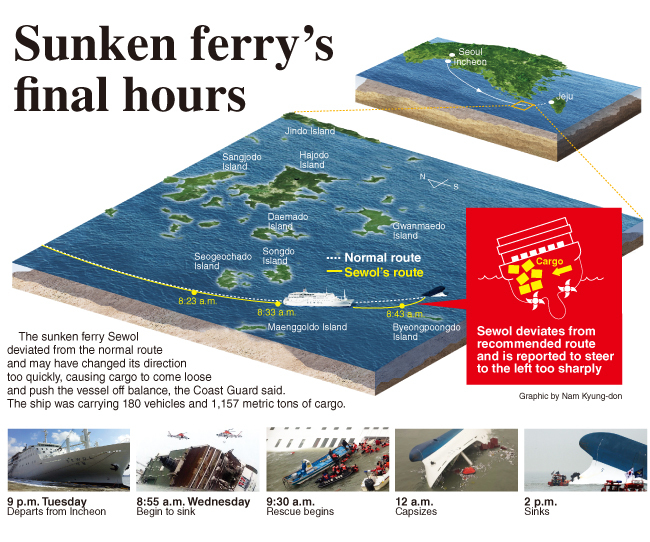 The ferry, operated by Chonghaejin Marine Co., began to sink at about 8:55 a.m. on Wednesday about 20 kilometers off the coast of Jindo Island, South Jeolla Province. The ferry was heading to Jejudo Island from Incheon.

The area where the ship sank is said to be rocky, and the Ministry of Oceans and Fisheries revealed that the ferry began to drift in an unexpected direction from 8:52 a.m.

Although a massive rescue mission involving the Armed Forces, Coast Guard and civilian vessels was launched almost immediately with the government setting up a central command, efforts have been hampered by strong currents and murky underwater conditions.

Little is known about the cause of the accident, but survivors report that there was a loud noise before the ferry began to sink, fueling speculations that it may have hit a reef.

In addition, there are speculations that the Sewol may have deviated from the usual route in order to make up for lost time. Due to heavy fog in Incheon late Tuesday evening, the ferry’s departure was delayed.