With “SmilePay,” users’ credit cards, CVC codes and identification numbers are automatically stored after they are first entered. This information is then brought up when shoppers want to use their credit cards ― issued by Samsung and Hyundai ― to shop at Gmarket by typing in an authentication number that is sent to their mobile phones.

“Customers don’t have to repeat the process of entering their credit card number, CVC code and other information every time they buy products on Gmarket,” said Lee Sang-min, spokesman for the online shopping mall.

“There is also no security patch or additional pop-up programs required to run the program, and this has helped shorten the purchasing time,” Lee added. 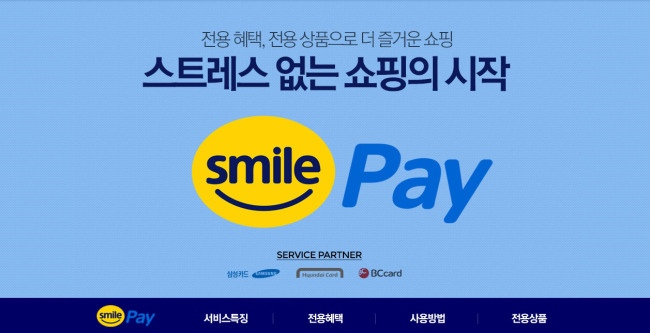 Particularly for shoppers who log on to Gmarket with their smartphones, which have much smaller screens than desktops or laptops, it will become that much easier to make purchases, the spokesman said.

This is not the first time Gmarket has devised marketing innovations to make shopping easier.

In 2006, Gmarket became the first local online shopping mall to run an English service. Those with overseas IPs are instantly rerouted to the English site, where foreign venders are given tailored support from consultants.

The company has also started overseas deliveries to the U.S., Australia, Canada and other countries, allowing people outside Korea to shop with ease.

Gmarket is also working on IT system support.

In 2013, Mac OS users were enabled to access Gmarket without having to use Microsoft Internet Explorer browsers. Since 2012, the company has supported Chrome and Firefox Internet browsers for credit card use, becoming the first domestic open market platform to do so.

In 2009, Gmarket became the first Korean online shopping mall to release a smartphone app for iPhones. In April 2010 an app for the Android system was introduced, followed by November’s release of an iPad app.

“We are working on these and many other programs to meet customer demands,” said Kang Sun-hwa, a marketing executive at Gmarket.