“One of the key reasons for the price surge is a drop in the global log supply amid growing demand in China,’’ said Won Yoo-gil, an official of Hansol Homedeco’s global business.

“Tree planting has become a high-yield business. International wood prices have increased 5.5 percent per year on average for the past decade, which is high enough to woo corporate investors.’’

Hansol Homedeco, an affiliate of Hansol Group and a manufacturer of laminated flooring and mediumdensity fiberboard, is considered one of Korea’s pioneers in overseas tree planting.

It entered New Zealand’s forest resource development market in 1996 by setting up a joint venture with Ngati Porou Whanui Forests, a Maori forestry company, located in Tikitiki, 150 kilometers north of Gisborne. The joint venture planted about 10,000 hectares of radiata pine trees between 1996 and 2003.

The company said it will start harvesting trees in the latter part of this year and continue until 2031, with the total harvest volume expected to surpass 5 million cubic meters.

“Most of the harvested trees are scheduled to be exported to China. The company expects to gain 1 trillion won ($950 million) from the New Zealand investment project, which is much more than what we invested over the past 20 years,’’ Won said.

The biggest challenge for overseas tree planting is that it takes a long time to turn a profit.

It took 28 years for Hansol Homedeco, for instance, to reap returns from its investments, the official noted. 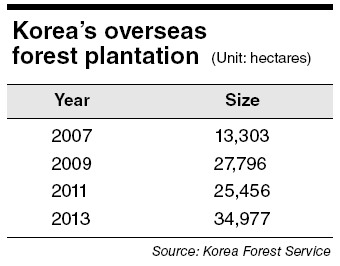 Industry experts, however, predict the number of companies planting trees overseas will continue to grow, as long as the outlook for global wood markets remains positive.

According to the Korea Forest Service, 31 local companies had launched tree planting operations, covering 314,355 hectares in 13 countries, as of the end of 2013.

“Not only pulp companies, but also conglomerates such as Samsung Construction & Trade and POSCO are expanding their investments in overseas tree planting,’’ said Kim Jung-hoon, a KFS official.

The KFS said it would offer supporting programs for local companies to expand their overseas operations to 1 million hectares by 2050 to meet the domestic demand for timber.

The country currently imports 83 percent of its lumber.

Southeast Asia and South America, which have suitable natural conditions for tree planting but lack capital and technology for forest development, are ideal regions for Korean investment.

The purpose of overseas plantation projects is to secure stable timber supplies and carbon credits.

Top steelmaker POSCO is among the Korean companies leading the way in overseas plantations for carbon credits.

The company registered its forestation project in Uruguay with the United Nations Framework Convention on Climate Change’s clean development mechanism in 2010.

POSCO, the first Korean company to register with UNFCC, purchased some 1,000 hectares of land in the South American country and planted approximately 880,000 eucalyptus trees to carry out the carbon credit project.