Wide range of recognition technologies, solutions to be introduced for data protection

Not only computers but also cars, televisions and front doors of people’s homes can one day in the near future be controlled by either the touch of a button on a mobile device or even by an advanced recognition algorithm or solution.

This concept that was once only seen in science fiction movies will soon become a reality.
Apple’s iPhone5S with fingerprint sensors introduced last year, followed by Samsung Electronics’ Galaxy S5 with its own fingerprint features this year, ushered in a new era for biometric authentication technology, experts said. 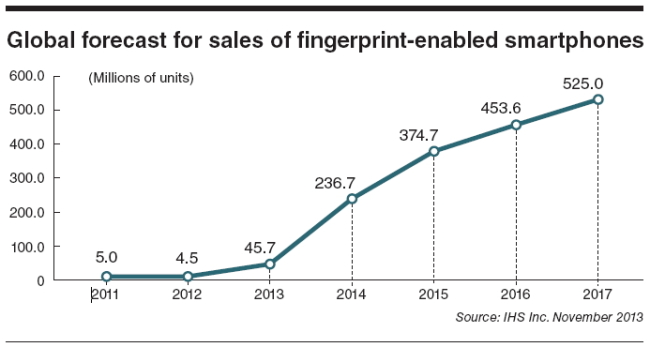 As the worldwide concerns about personal data protection increase amid an upsurge in mobile data, a wide range of biometric technology from iris and palm print identification to face recognition will be sought out for further development.

“It is just a matter of time for smartphones equipped with an iris scanner to be introduced in the global markets,” said Kim Jai-hie, director of the Biometric Engineering Research Center at Yonsei University.

“Noncontact palm and fingerprint reading solutions are also ready to be deployed, not only for smartphones but other gadgets as well. This would pave the way for the technology to identify not only the owners but also third parties.”

As noncontact palm and fingerprint scanning solutions use rear-facing cameras on smartphones to recognize biometric information, they do not require extra sensors to be developed and installed on mobile devices.

This will help manufacturers effectively trim production costs and eliminate the need to alter product design.

Microsoft founder Bill Gates’ charity is said to be using palm-print readers to identify those who have and have not received vaccines in Africa.

Police officers patrolling the streets and financial institutions providing doorstep banking services can effectively use such noncontact solutions for personal identification, according to the BERC director.

Using banking services with smartphones or other electronic products equipped with advanced biometric sensors is no longer far-fetched.

Biometric technology will allow smart cars, houses and electronic products to distinguish their owners from strangers in the near future, according to Lee Jae-won, CEO of Suprema, a Korean biometric platform company.

“You will not even need a key to enter your house. Your house will recognize you as soon as you approach the front door and let you in,” Lee said.

Some technical obstacles still need to be surmounted. More secure biometric technology for smartphones also must be developed, as devices with multiple authentication features such as iris and facial recognition will become prime targets of hackers, experts said.

“Fingerprint sensors installed on the iPhone 5S and Galaxy S5 are not apt for financial transactions since the basic algorithms used for the devices show high rates of false recognition,” Suprema CEO Lee said.

He also pointed out that the current biometric technology can not yet be used for machine-to-machine connection and banking services.

BERC director Kim, also a professor of electronic engineering, said that the equal error rate, or the average rate of false recognition, for iris technology increases for those wearing glasses.

Also, public iris data is still limited since iris readers have not been as widely used as fingerprint scanners, he noted.

It was widely anticipated that Samsung Electronics would adopt an iris scanner for its Galaxy S5, but the iris scanner was said to have been ditched at the last minute due in part to high development costs.

Kim and Lee said the industry has come a long way in finding solutions to current problems.

The bulky size of iris camera modules and the difficulty of recognizing a person’s iris at a distance are technically solvable.

Since biometric images are processed and encrypted into a data formula, known as biometric hashes, there is little chance of personal biometric information being stolen and used for unethical purposes.

A team led by Kim at the BERC of Yonsei University is developing security measures using biometric technology that allow users to freely get rid of their personal information in any systems they use when the data is compromised.

Suprema plans to introduce an Internet of Things system platform with fingerprint and facial recognition technology.