Company dinners often involve round after round of “boilermakers” ― hard liquor (soju or whisky) mixed with beer ― and this business boozing has fueled the demand for driver-for-hire services.

The services, called “daeri unjeon” in Korean ― which literally means “replacement driver” ― started in the late 1990s targeting businessmen who wanted to get home in their own vehicles after a couple of rounds of heavy drinking.

Over the past decade, the “daeri unjeon” service has been one of Korea’s fastest growing industries, in line with the increasing rate of alcohol consumption in the country. 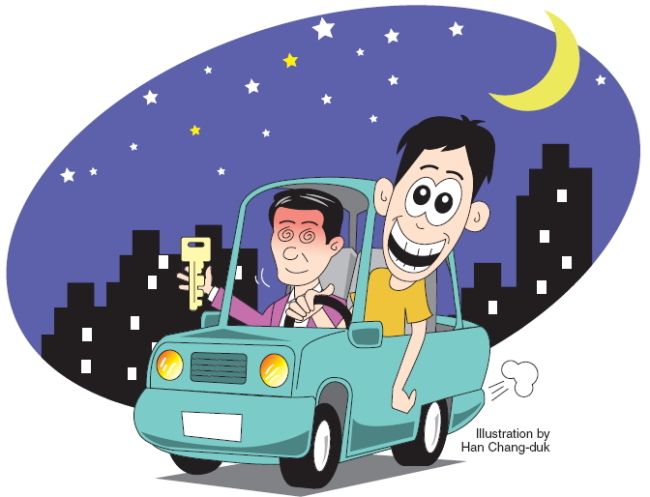 It is estimated that there are more than 5,500 registered firms across the country, and thousands more unregistered ones, employing up to 120,000 replacement drivers for inebriated people, according to Korea Service Driver Society, a lobby group for the drivers.

He noted that the driver-for-hire service is becoming more popular with not only inebriated people, but also with those who are too tired to be behind the wheel, due largely to their affordable prices.

“We see an increasing number of customers during the daytime, and now especially many high or middle-ranked business people use our service for short business trips or business meetings because our service is still relatively cheap, compared to travelling in a chauffeur-driven car,” he added.

Jung Mi-yeong, a mother of two young children in Busan, said she often calls for a replacement driver when she has to take her children to a hospital or a shopping center by herself.

“It’s much more convenient and easy for me to bring my children along, rather than me driving or taking a taxi,” she said.

To use the service, you can simply call the firm’s number and tell the operator your location and destination. In Seoul and other major cities, the wait for a driver to arrive is only about 10-15 minutes.

Now, people are able to use smartphone applications, which match the customer with the nearest driver in the area using GPS.

The unique driver-for-hire service is currently available across the country. The rates are calculated on the basis of distance, starting from 10,000 won ($9) in Seoul and other major cities ― for example, a ride from Gangnam district in southern Seoul to Mapo-gu, in western Seoul, costs 10,000 won to 13,000 won, no matter how many people might be in the car.

Kim noted that the number of replacement driver service providers and fierce competition among them was forcing down prices.

But he said that low prices often came at the expense of safety.

“Many replacement drivers are now driving without insurance. And as the prices go down, so does the service quality,” he said.

“The government urgently needs to introduce related regulations, and to look at unregulated firms to keep monitoring the price.”