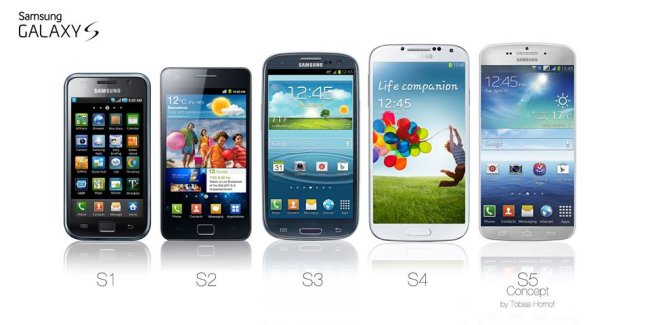 Amid the mounting rumors about the upcoming unveiling event from Samsung Electronics later this month, fresh speculation surfaced on Tuesday that Samsung Electronics and Apple Inc. would both roll out bezel-free phones that support fingerprint scanning for their next-generation flagship models ― the Galaxy S5 and the iPhone 6.

An industry source said Samsung Electronics’ Galaxy S5 would sport a display without a bezel, or the rim surrounding a screen, and allow users to scan their fingerprints at the bottom of the smartphone screen. The phone will also eliminate the home button hardware featured on the previous Galaxy models, he said.

“The finger-scanning technology will be available on the bottom left and right sides, and not the entire display,” the source said.

“Scanning fingerprints on the entire screen, which was much talked about recently, will be available in the latter half of this year as there are still technological hurdles to overcome,” he added, hinting that the production yield for the full-screen fingerprint scanner is still far from satisfactory.


The source said that Samsung’s top rival Apple is also testing a similar prototype sporting a bezel-less screen that features a fingerprint scanner.

Furthermore, industry watchers believe the next Galaxy phone will be even slimmer.

This is because while the existing touch panels widely used for other smartphones consist of four layers including two ITO (indium tin oxide) films, Samsung will be utilizing a new panel technology that would further trim the depth of the phone.

The single-layered panel enhances the display’s transparency level, leading to improved energy efficiency and viewing accuracy, another industry source said. This is also the secret to bezel-free displays, allowing for the removal of the side bezels.

Last but not least, the Galaxy S5 will allow users to swipe and activate the screen while wearing gloves.

“With the help of increased sensitivity on the panel, users will be able to swipe and tap on the screen with their gloves on,” the source said.

He added that more smartphones incorporating health care functions, such as fingerprint sensors which can also check a user’s pulse, will come out in the near future.

Some critics, however, cast doubt on the adoption of bezel-free displays, saying the panels could become too vulnerable to external impact.

Samsung has been working on the bezel-free technology since 2012 under the project codenamed Project B or Galaxy B.

Apple’s next iPhone, meanwhile, is widely rumored have a bigger display.