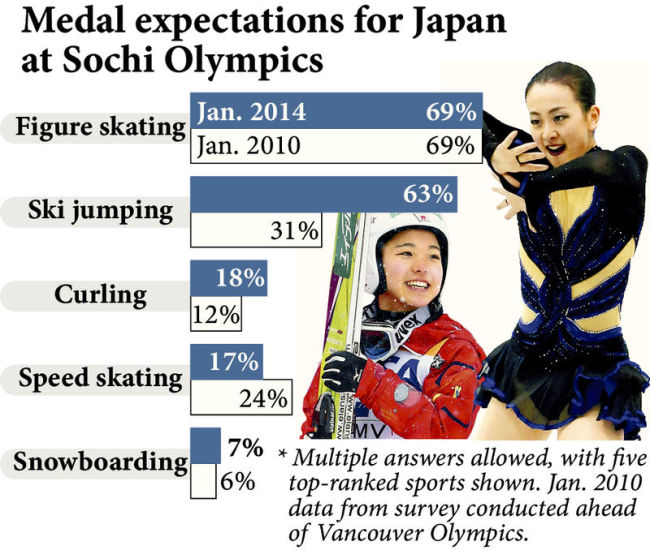 About 70 percent of respondents expect Japanese athletes to win medals in figure skating at the upcoming Sochi Olympic Games, followed by 63 percent with the same expectation for the country’s ski jumpers, according to a recent Yomiuri Shimbun survey.

When asked which sports they expected Japanese athletes to medal in, respondents overwhelmingly named figure skating and ski jumping, a trend that apparently reflects high hopes for powerful Olympians such as figure skater Mao Asada and ski jumper Sara Takanashi. Respondents were allowed to give multiple answers to the question. Among other sports, curling came in at 18 percent and speed skating at 17 percent.

The face-to-face sports survey was conducted Jan. 18 and 19, and polled 3,000 eligible voters nationwide, of whom 1,522, or 51 percent, gave valid answers. Among the respondents 46 percent were men, and 54 percent were women.

Meanwhile, 82 percent said they were interested in the Sochi Games, surpassing the 78 percent who said so in a similar survey conducted ahead of the 2010 Vancouver Olympics.

Among respondents, 85 percent expressed interest in the 2020 Summer Olympic Games in Tokyo.

Asked to pick up to three areas on which the nation and relevant bodies should focus their efforts in preparation for the Tokyo Games, 48 percent chose “financial support for Olympic national team members,” followed by “selecting, fostering athletes from as early an age as possible” at 42 percent.

Sixty-eight percent said they hoped baseball and softball would return to the Olympics in 2020.

When asked which sports they like to watch, professional baseball ranked highest with 49 percent, followed by high school baseball at 34 percent and ekiden long-distance relay racing and marathons at 32 percent and 31 percent, respectively. Respondents were allowed to pick multiple sports.

The Yomiuri Giants were named the favorite baseball team by 20 percent, making them the most popular baseball team for 23 years running.

Asked to name up to three favorite athletes, Asada, who ranked second in last year’s survey, topped the list for the first time. She was followed by Ichiro Suzuki of the New York Yankees, who ranked No. 1 for nine years in row.