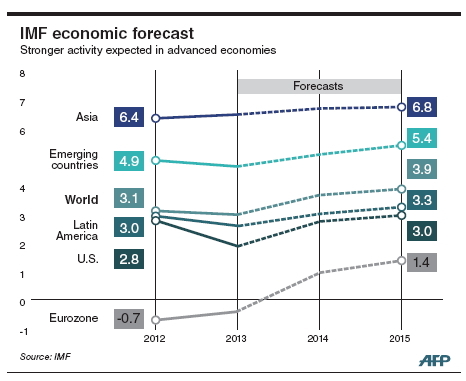 The International Monetary Fund raised its forecast for global growth this year as expansions in the U.S. and U.K. accelerate, and urged advanced economies to maintain monetary accommodation to strengthen the recovery.

The global economy will grow 3.7 percent this year, compared with an October estimate of 3.6 percent, the IMF said in revisions to its World Economic Outlook released in Washington today. U.S. gross domestic product will expand 2.8 percent, compared with 2.6 percent; Japan will gain 1.7 percent versus 1.2 percent; and the U.K. will increase 2.4 percent from 1.9 percent, the report showed.

“In advanced economies, output gaps generally remain large and, given the risks, the monetary policy stance should stay accommodative while fiscal consolidation continues,” the Washington-based organization said in the report. “In many emerging markets and developing economies, stronger external demand from advanced economies will lift growth, although domestic weaknesses remain a concern.”

Central banks in the U.S., Japan and the euro area face inflation levels under their targets while trying to accelerate growth with policies including benchmark interest rates near zero and bond-buying programs. While it raised the outlook for advanced nations, the IMF said “downside risks remain,” including financial-market volatility in emerging markets.

China, the world’s second-largest economy, is projected to grow 7.5 percent, faster than the 7.3 percent seen in October, after 7.7 percent last year, according to the report.

Olivier Blanchard, the IMF’s chief economist, said in a prepared statement that the fund expects the Federal Reserve’s benchmark interest rate to rise in 2015.

Among the new risks to advanced economies, the IMF cited “very low inflation,” particularly in the euro area, as becoming more significant and raising the prospect that longer-term inflation expectations could head lower.

“This raises the risks of lower-than-expected inflation, which increases real debt burdens, and of premature real interest rate increases, as monetary policy is constrained in lowering nominal interest rates,” the IMF said in the report. “It also raises the likelihood of deflation in the event of adverse shocks to activity.”

In the U.S., “the pickup in 2014 will be carried by final domestic demand, supported in part by a reduction in the fiscal drag as a result of the recent budget agreement. But the latter also implies a tighter projected fiscal stance in 2015,” the IMF said in the report. “The euro area is turning the corner from recession to recovery,” it said, adding that the improvement is likely to be more modest in economies still under stress.

In a conference call, Blanchard said the policy framework and timing implemented by the Fed is “reasonable” and said he doesn’t think the Fed is “biased in the direction of exiting too early.” He pointed to a low-probability scenario of risks from low interest rates building faster than expected.

Blanchard also said the IMF sees a 10 to 20 percent probability of deflation in Europe tied to a slow economy, and urged the European Central Bank to commit to sustaining demand and maintaining inflation.

The fund predicted euro-area growth of 1 percent this year, almost the same as its forecast in October, and 1.4 percent next year.

While U.K. growth has been boosted by easier credit and better sentiment, “economic slack will remain high,” the IMF said. “In Japan, growth is now expected to slow more gradually compared with October 2013 WEO projections. Temporary fiscal stimulus should partly offset the drag from the consumption tax increase in early 2014,” the IMF said.

In China, the leadership is trying to reduce the economy’s reliance on debt and mitigate risks of a financial crisis that could hinder the changes the ruling Communist Party pledged in November to implement.

Data last week from the People’s Bank of China showed a record drop in second-half credit, following money-market cash crunches in June and December that underscored the difficulty of bringing credit under control.

“Growth in China rebounded strongly in the second half of 2013, due largely to an acceleration in investment,” the IMF said. “More progress is required on rebalancing domestic demand from investment to consumption to effectively contain the risks to growth and financial stability from overinvestment.”

In other emerging markets, domestic demand has remained weaker as tighter financial conditions since mid-2013 ― when speculation mounted that the Fed was preparing to taper ― as well as policy or political uncertainty and bottlenecks damp investment, the IMF said. Brazil is projected to grow 2.3 percent this year, compared with 2.5 percent in October, and Russia’s outlook was cut by 1 percentage point to 2 percent. (Bloomberg)