Chinese research may assist in the success of human colonization 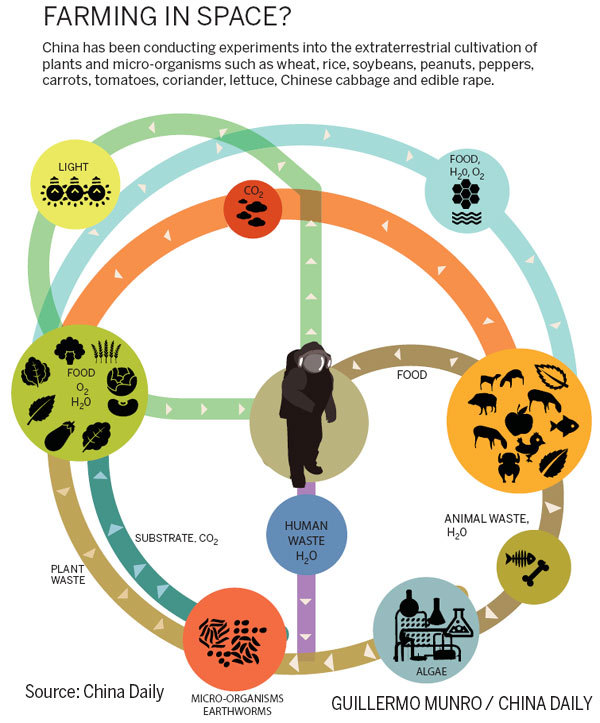 Space, in the words of Captain James T. Kirk, is the final frontier. However, although the human colonization of space is central to the dreams of many aficionados of science fiction, only the most fanatical would contend that humans will achieve that ambition anytime soon.

The problems are manifold, ranging from solar radiation and frigid temperatures to the provision of adequate supplies of oxygen, food and water. Supplying space stations is almost prohibitively expensive. The United States spends between $10,000 and $100,000 to transport every kilogram of food it sends into space, and the huge distances between Earth and our nearest neighbors would render a resupply program almost impossible, even if humans were able to establish successful settlements outside Earth’s atmosphere.

Now, however, it’s hoped that research undertaken by a team of scientists at Beijing University of Aeronautics and Astronautics will provide some key answers to one of the problems ― that of growing plants in space.

At their laboratory, called Yuegong-1, or Moon Palace, the scientists simulated a lunar environment ― replicating the differences in temperature and gravity ― to conduct experiments into the cultivation of plants and microorganisms in an extraterrestrial environment.

The researchers used a limited number of resources; food, water, oxygen, soil, livestock and, most important, plants with a strong resistance to the types of radiation found in space.

The team, headed by professor Liu Hong, is reported to have conducted successful tests on more than 10 plant varieties, including wheat, rice, soybeans, peanuts and peppers. Rice was the most-tested plant because it has a wider range of variations, and the “space environment” provides ideal breeding conditions.

The model mimics the life cycle found on Earth: Mature plants provide oxygen for survival, while decomposing human and animal waste, rich in essential amino acids and nitrogen, is used as a powerful fertilizer to promote the growth of more plants. To complete the cycle, atmospheric regeneration, water purification and the treatment and recycling of waste also take place.

While Liu declined to elaborate on the test procedures, such as the amount of oxygen and water used in the tests or the specific type of soil that would have to be carried into space, she said more details are likely to be made public after the Spring Festival holiday, which falls at the end of the month.

For Li Yinxin, a researcher at the Chinese Academy of Sciences’ Institute of Botany, exo-cultivation is theoretically feasible.

“The model (at Yuegong-1) is called a Bio-regenerative Life Support System, otherwise known as a Controlled Ecological Life Support System. Chinese scientists have been working on this project for more than 30 years with the aim of finding plants capable of sustaining their growth cycles through adaptation to a previously unfriendly environment,” she said.

Fu Dezhi, deputy director at CAS’ South China Botanical Garden, who has spent more than 10 years researching space-cultivation programs, said the project is of theoretical significance and has a practical value.

The approach centers on analysis of crop mutations prompted by the exo-environment. The genetic variations induced by high levels of radiation and a weak gravitational pull, such as chromosomal changes and alterations to the structure of plant DNA and chemistry, can produce beneficial mutations, including new strains with higher yields and an improved resistance to pests.

Although the results can be highly variable, Darwin’s theory of the “survival of the fittest” suggests that the surviving plants will be capable of adapting through mutation and ultimately forming a harmonious relationship with the exo-environment.

Last year, China completed its ninth series of experiments into exo-cultivation. “We’ve been working on hydroponic cultivation, using a closed or semi-open space, to grow edible plants,” said Fu. He was unable to elaborate further because the details of the project are classified, but he emphasized that success is often dependant on close cooperation between exo-scientists and botanists.

“First, we have to select the appropriate growing media, usually an agar nutrient. The selected plants must have highly efficient photosynthetic processes so they will absorb some carbon dioxide, but release large amounts of oxygen,” he said.

“They must also have a continuous growth cycle and high sustainability, be nutritious and taste good. They shouldn‘t cause environmental pollution or any other unwanted effects, and should be capable of growing in limited amounts of sunlight or artificial light.”

In 2012, two test subjects from the China Astronaut Research and Training Center spent 30 days living in Yuegong-1. In the 36-square-meter self-contained lab, Tang Yongkang and Mi Tao breathed oxygen produced by the Chinese cabbages and lettuce being grown under the powerful lights. They also picked 30 to 50 grams of fresh vegetables for their daily meals.

Farming in space could assist colonization

The test proved that in a planted area of just 13.5 square meters, the “human to plant” exchanges of oxygen and carbon dioxide, in tandem with technology to control the internal equilibrium of the plants, can provide enough oxygen to sustain human life. The plants, which must share a symbiotic relationship, replenish the supply of oxygen while disposing of the harmful carbon dioxide produced during respiration.

In Russia, experiments have been conducted in simulated exo-environments for 14 years. The results indicate that 63 sq m of plant life can provide roughly 70 percent of the daily food intake of three people.

Chinese scientists originally investigated the properties of a type of single-cell algae with high levels of carbon dioxide absorption and oxygen release, but the “food” produced had an unpleasant taste and relatively low nutritional value.

Research to identify plants with a strong absorption capability plus a large number of nutrients is an ongoing project and attention has now shifted to mushrooms, yeast and different varieties of algae, including chlorella. Azolla, a plant from the aquatic fern family, is likely to come under scrutiny during the next batch of tests.

Li Yinxin proposed using the human waste from containers on manned spacecraft as a medium to conduct tests into cultivation in high-salt soils.

“Astronauts’ bodily fluids and excrement usually contain high concentrations of salt, especially nitrogen, but plants generally can‘t survive in a high-salt environment. If we can collect these specific data, the targeted research will be more effective. My experience of working on islands suggests that chenopodiaceae (also known as ‘Goosefoot,’ a family of plants that includes beetroot and spinach, which also have very high tolerance of salty soil) may be suitable because islands are also high-salt regions. We also cultivated salicornia (succulents that also display a high resistance to salt) on some of the Xisha Islands and achieved a high survival rate,” she said.

Despite the success of the experiments at Yuegong-1, the simulated environment is not the real thing, of course. Liu Hong was reluctant to say the tests were conducted in an exact replica of the lunar environment because it’s so difficult to produce the high levels of radioactivity found on the moon, along with its low gravity.

Liu told Southern Metropolis that the experiments were extremely difficult to conduct; the plants had to undergo wide fluctuations in temperature, from -175 C to 120 C, and although the tests were conducted in a simulated environment, there‘s always the possibility of unknown variations in space.

New Scientist reported that next year NASA intends to send canisters to the moon containing oxygen, which will be used to germinate seeds embedded in nutrient-infused filter paper.

Despite the success of the Yuegong-1 project, professor Liu Huajie of Peking University who participated in the Biosphere 2 project ― a 1.27-hectare, enclosed artificial ecosystem in Oracle, Arizona ― was not optimistic about the prospects for exo-cultivation.

“Judging from my experiences with Biosphere 2 and also from an evolutionary perspective, the likelihood of real success on the moon is small. The motivation behind the experiment is understandable, but it underestimates the unique nature of Earth as Gaia ― the mother of life ― which is irreplaceable. Humans should abandon their fantasies about space migration and take better care of Earth.”