Japan plans to use funds from dormant bank accounts 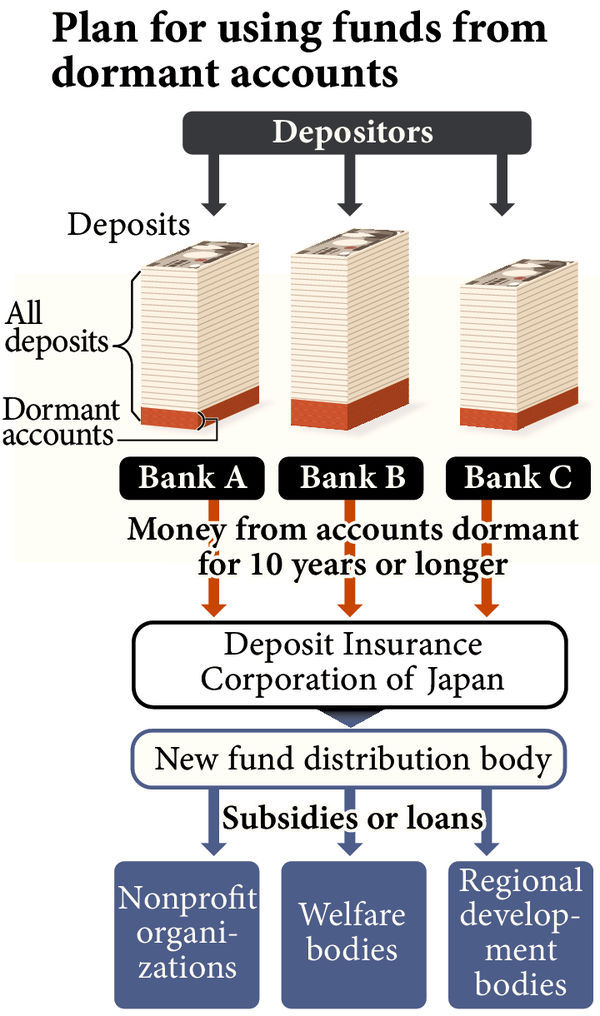 The ruling Liberal Democratic Party and New Komeito plan to use money in bank accounts that have been left untouched for 10 years or longer to support public interest activities, The Yomiuri Shimbun has learned.

These so-called dormant accounts total 85 billion yen ($812 million) annually, and the account holders cannot be contacted. While their respective financial institutions currently record the money in dormant accounts as part of their own profits, account holders can still withdraw the money after accounts have been deemed dormant if they bring their passbook or seals to the bank.

If the plan is realized, money from dormant accounts is likely to be used to support social welfare or educational activities by private organizations, potentially as early as 2015, according to sources.

The two parties reportedly aim to submit a relevant bill to the ordinary Diet session to be convened later this month, with the sponsorship of a suprapartisan group of lawmakers, including the main opposition Democratic Party of Japan.

Under the plan, the money in dormant accounts will be transferred to the Deposit Insurance Corporation of Japan, established by the government, the Bank of Japan and member financial institutions. A newly established body will then distribute the funds as subsidies or loans to individuals or corporate bodies who are engaged in public interest activities. The Cabinet Office or a third-party panel will review whether the money is distributed appropriately, the sources said.

The LDP and New Komeito are currently making final arrangement with the Financial Services Agency and the Cabinet Office, according to the sources.

The plan targets only accounts that are deemed dormant following the enactment of the bill, the sources said. As in the past, depositors will be permitted to withdraw the money even after an account has been left unattended for 10 years or longer.

Currently, money in dormant accounts at banks and other financial institutions is automatically recorded as profit. Some lawmakers have indicated at the Diet that it is unfair for banks to make profits without making any effort. In many countries, including Britain, Ireland and South Korea, dormant account money is used for social welfare or education.

Financial circles in Japan had been reluctant about the plan, which would lead to a decline in their profits. Furthermore, transferring the funds to the DIC will impose a significant burden on financial institutions.

However, as the latest plan by the ruling parties does not include accounts that have already been deemed dormant, the burden of these transfers will likely be reduced, which led some to make an about-face, the sources said.

While the LDP, Komeito and the DPJ are now working to submit a bill sponsored by a suprapartisan group of lawmakers, the ruling parties will submit the bill on their own if they encounter too many obstacles in reaching agreement with the DPJ on issues like selecting recipients of the funds. (The Japan News)