Seoul officials said Sunday that they were “closely” monitoring the foreign exchange market adding that currency risk would be the biggest hurdle for the nation’s economy this year.

“We are closely analyzing the recent movement in foreign exchange and stock markets and the trends in foreign investors’ funds. The increased volatility would pose a great burden on the Korean economy’s recovery,” a Finance Ministry official said.

“The government is not considering a short-term response for now but will take measures to stabilize the market to ensure the real economy is not affected by the financial market instability,” he added.

The nation’s stock market started 2014 in a bearish position amid mounting concerns over the dollar’s and the yen’s further slide against the Korean won, which could deal a blow to the export-driven economy. 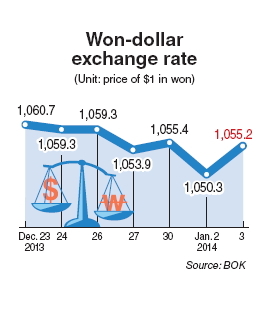 The U.S. dollar closed at 1,050.30 won on Thursday, the greenback’s cheapest position against the won in more than two years.

But he noted that the ministry was “observing” the situation and would not take immediate action, adding “It mustn’t be agitated by every positive or negative movement.”

“(When needed) we will carry out stabilizing measures for financial and foreign-exchange markets,” he said Friday.

The market is eying whether excessive currency weakness will push the Bank of Korea to intervene in the foreign-exchange market by possibly altering the country’s key interest rate, which it kept unchanged at 2.5 percent for the seventh straight month.

Many experts, however, predict the BOK’s Monetary Policy Committee, which is set to announce its benchmark interest rate on Thursday, is likely to maintain the rate. They cited the BOK chief’s remarks that the central bank had done its part in easing its monetary policy, and reflecting his prediction that the country’s economy is likely to continue its upward move.

The BOK forecasted earlier the Korean economy will grow 3.8 percent this year. Governor Kim said that Asia’s fourth largest economy is likely to continue its momentum this year.

But he added: “Uncertainty over the Fed’s tapering of quantitative easing and a possible slowdown in emerging countries remain as downside risks to the global economy, and would increase market volatility.”

The rise of the won against major currencies resulted in a tumble in the Korean stock market.

The benchmark Korea Composite Stock Price Index finished last week at a four-month low at 1,946.14, down 2.1 percent from a week earlier, as market heavyweights such as Samsung Electronics lost ground in part because of fears that the won’s strength would hurt its profits.