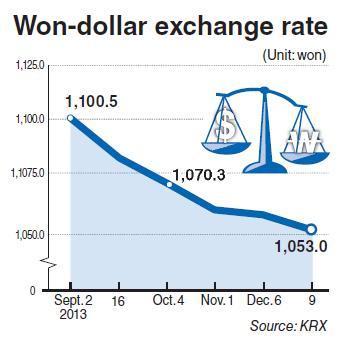 Foreign exchange authorities are expected to conduct another round of intervention in the currency market in the coming days, as the U.S. dollar further lost ground to the Korean won on Monday.

Dealers are focusing on the coming sessions later this week as to whether the dollar will drop below the 1,050-won mark.

Analysts predicted that the Finance Ministry and the Bank of Korea would not tolerate the situation and soon intervene in the foreign exchange market ― whether it is carried out in the form of a verbal action or en masse buying of U.S. dollars in a low-key manner.

Analysts, however, are increasingly betting on the won’s gradual depreciation against the dollar amid worries over the U.S. administration’s move to roll back its quantitative easing ― a measure pushed from 2008-2012 to boost the economy.

Korea’s government officials as well as private think tanks shared the view that the U.S. investors were poised to relocate their funds to the local market after enjoying gains, or capitalizing their investment, in Korea.

Some critics argue that emerging markets are not attractive to U.S. and European investors at the current stage. They say that investors have preference in U.S. equities and bonds that guarantee higher gains because the country is leaning toward a higher interest rate policy.

“More foreigners are looking for the right timing to capitalize their investment before the U.S. government’s upcoming policy to scale back its economic stimulus package,” said an analyst at Woori Investment & Securities.

Meanwhile, the Korea Composite Stock Price Index, which stayed below 2,000 for the sixth consecutive trading session since Nov. 29, gained 19.97 percent on the day to close at 2,000.38.

Securities analysts attributed the gain to foreign and corporate investors’ active buying on the news of noteworthy improvement of economic indices including the U.S. employment rate.

Foreigners, who have been net sellers over the past four trading sessions, net purchased Korean equities worth 75.5 billion won ($68.6 million) on the main bourse Korea Exchange.