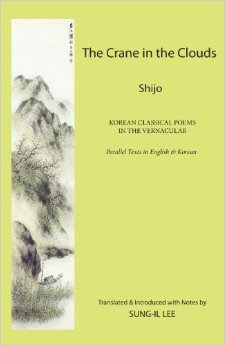 The Crane in the Clouds: Shijo: Korean Classical Poems in the Vernacular, By Lee Sung-il
(HOMA & SEKEY BOOKS)

“Sijo is a uniquely Korean form of poetic composition,” writes Lee, Professor Emeritus at Yonsei University in Seoul, in the book. “Neither composing nor reading a sijo required any rigorous training. Simply stating what one felt at a given moment in three lines was all that was necessary to produce a sijo.”

Each page of the book has both the English and the original Korean versions of shijo. Among the featured ssijo is “One Winter Night,” by the celebrated 16th century Joseon courtesan Hwang Jin-yi, known for her intellect and talent in writing.

“Of a long dreary midwinter night, I would cut out the middle/ And keep it rolled under my cotton quilt/To be warmed in the spring wind./ The night when my love comes all frozen,/I shall unroll it slowly for him.”

How can one translate sijo into English verse?

“Translating Korean poems into English is not simply a matter of changing the garb of language,” Lee wrote. “The two literary climates are mutually heterogeneous to such a degree that a translator is bound to encounter much frustration over the unbridgeable chasm that separates the two. But striving for convergence of two poetic utterances ― the Korean and the English ― not only in meaning but also in tone and mood is a task imposed on one who dares to transplant a poem into another linguistic soul,” elaborates Lee, who studied English literature at Yonsei University, University of California at Davis and Texas Tech University in the U.S. He also taught at the University of Toronto in Canada and University of Washington in the U.S. as a visiting scholar.

Though the book was written for the general public, Lee said the book will be also particularly useful for those who study Korean studies or the Korean language.