The global financial markets are expected to “overreact” and face “increased volatility” as the U.S. Federal Open Market Committee is set to provide further details of its monetary stimulus exit plan at a meeting next week, the governor said.

Korea’s strong fundamentals backed by 18 straight months of current account surplus will be able to withstand any external shocks from the U.S. move to normalize its unconventional monetary policy. The normalization may begin soon after the FOMC meeting on Sept. 17-18. 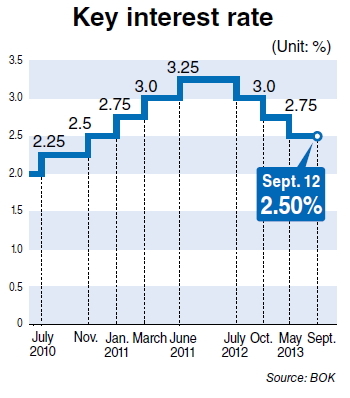 Brisk Korean exports on the back of global economic recovery expectations were enough for the BOK’s monetary policy committee to reach a unanimous decision to hold its key base rate at 2.50 percent for this month.

The BOK governor expects the U.S. to coordinate the timing and scale of its tapering in accordance with the economic conditions of not only the U.S. but also the rest of the world.

Nevertheless, he said Asia’s fourth-largest economy would need to counter uncertainties stemming from the phase-out of the U.S.’ quantitative easing with its own set of existing macroeconomic policies.

Korea would not need to devise a whole new policy for such market moves as it already has solid measures such as the so-called macro-prudential levies to cushion the country from increased capital-flow volatility, the governor noted.

The BOK maintained a rosy outlook for the Korean economy to grow 3.7 percent in the second half of this year and reach its traditional growth of 4 percent next year, despite negative factors such as the U.S. tapering and Syria risks, and the country’s shortfall in tax revenue.

The crisis in Syria and news of falling oil inventories in the U.S. are fueling a rise in oil prices, which could dent Korea’s economic recovery efforts.

But the BOK governor said Korea remained on track toward solid recovery as the central bank had already factored in oil prices when calculating its economic projections.

Also, the central bank does not expect the country’s tax revenue shortfall to adversely affect its growth in the fourth quarter as Korea still has yet to see the effects of its fiscal and monetary stimulus.

The central bank’s rate cut in May in a bid to support the government’s fiscal stimulus is expected to show positive effects in the market toward the end of this year.