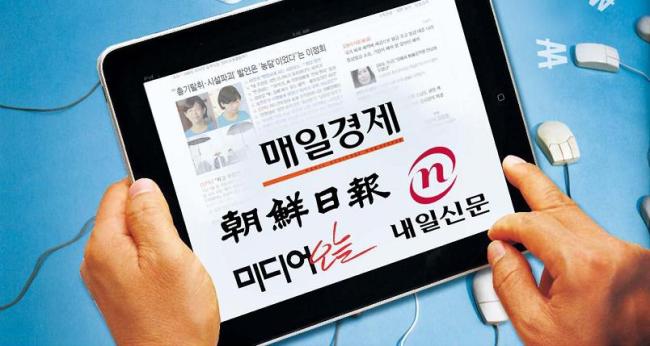 A change in distributing online news might be afoot in South Korea where most of the news is currently available free of charge through dominant portals. Major newspapers are moving to charge for their premium content in the face of an industry-wide decline in newsprint advertising.

Critics, experts and readers alike poured out a torrent of opinions about the local media’s latest move to generate fresh revenues from online news at a time when more readers are shifting from print for PC to smartphones and tablets for free news.

Korean newspapers seem to be encouraged by successful cases overseas. The New York Times, for instance, has signed on around 700,000 paid digital subscribers through its “metered pay wall” platform.

“Their introduction of paid services is a symbol of the news outlets moving from an old Web portal-based framework to a new platform,” said Choi Jin-soon, adjunct professor at the Graduate School of Mass Communications and Public Relations of Konkuk University and also a reporter for Korea Economic Daily. “Major news companies will now try to reinforce their competitiveness and focus more on the content.”

The paper said some 20,000 subscribers have already signed up for the Maekyung E Newspaper. Observers said the bulk of early subscribers are those who mainly read the PDF files, as the paper’s premium service has just launched, with details revealed sketchy at best.

Maeil Business’s print readership was 580,000 in 2011, according to data released by the Korea Audit Bureau of Circulations in December 2012.

Chosun Ilbo, a conservative daily with the biggest paid circulation share in the nation, is slated to launch a similar service later this month, along with Media Today and Naeil Newspaper.

Choi of Korea Economic Daily said his paper is also “gradually taking steps” toward the paid subscription model. He said the Maeil Business Newspaper’s move might offer a catalyst in stirring up interest toward online news.

But most newsrooms in Korea are still focused on producing the print version; the quality of online news, regardless of whether they are labled as “premium” or not, is yet to be tested in the market, Choi said.

Another challenge is that local readers are not enthusiastic about paying for online news. After all, most Korean newspapers produce similar news items, resulting in fewer dedicated readers willing to pay for their favorite paper’s content. And state-funded wire news provider Yonhap News Agency sells its real-time news to major portals such as Naver so that ordinary readers can browse all the major straight news without paying a dime on their smartphones or PCs.

It remains unclear whether the premium content by local newspapers will be enough to lure subscribers to open up their wallets.

An unnamed official of the Korea Press Foundation expressed doubt about the paid service by Maeil Business, questioning whether it was appropriate to start a paid service based on such skimpy content.

Another journalist, who did not give his name, said that the service was “just not ready.”

“The newspaper companies would have to live up to the expectations (of readers). For instance, half the stories would have to be features,” said an anonymous reader via Twitter. “It will not be easy switching to paid platforms that rely on old news you could see anywhere.”

The push for paid digital subscriptions, for all the skepticism, seems inevitable. Local newspapers are grappling with dwindling paper readers and plummeting advertising revenues. Charging for their content online and creating fresh revenue streams are make-or-break tasks for Korea’s embattled newspapers.

According to Media Today, the combined net profit of the country’s 35 biggest news companies dropped 68.47 percent in 2012 from a year earlier, and sales fell 3.96 percent.

Newspapers’ online advertising revenues were also hard hit in recent months. Naver, the country’s biggest portal, overhauled its news section in April in a way that resulted in a sharp drop in online traffic for newspapers. This, in turn, led to a freefall in online advertising revenue at the media involved, deepening the sense of crisis and sending a handful of newspapers scrambling to introduce paid subscription models.