Extramarital births at all-time high in 2012

According to the data compiled by Statistics Korea, 10,144 babies were born outside marriage in 2012, up 1.9 percent from a year earlier. It marked the highest number since the agency started to compile such data in 1981. 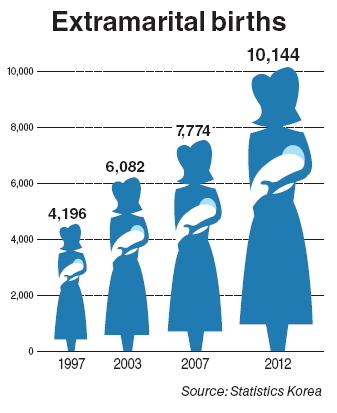 “The extramarital birth (rate) is increasing in the country as South Koreans‘ negative perception over such births has gradually changed,” an official from the statistics agency said.

Extramarital births accounted for 2.1 percent of all births in South Korea, marking the lowest rate among the members of the Organization for Economic Cooperation and Development.

“In South Korea, unmarried mothers are challenged with the negative social bias as well as discriminations in finding work,” said Kim Young-chul, a researcher at the Korea Development Institute. “Such conditions make unmarried couples choose abortion.”

In the meantime, childbirths in Korea fell for the sixth straight month in June amid worries over the country‘s chronically low birthrate, the report showed.

The number of babies born in June came to about 33,400, down 12.6 percent, or 4,800, from the same month a year earlier. This marked the sixth straight month that childbirths have declined since January. (Yonhap News)