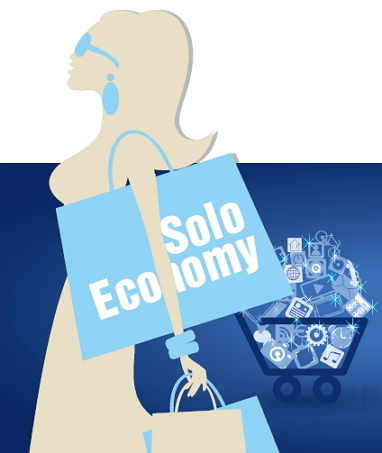 Kim Hee-won, 38, a senior marketing manager for a leading credit card firm, is single and has lived alone since returning to Korea in 2009 upon completing her MBA degree in the United States.

She tends to keep to a tight monthly budget in preparation for her future, but is willing to open her wallet to travel and hunt for gourmet food.

Hong Sang-bin, 48, a public relations director of a local business group, is also living alone as a “goose father.” The term refers to a relatively rich Korean man who works and lives alone to fund his wife and children living in an English-speaking country for their education.

He started studying for his Ph.D. last year to prepare for his life after retirement.

“Unlike the past, solo households are increasing at a fast pace in every age group for different reasons,” according to Han Jung-min from the Korea Institute for Industrial Economics and Trade.

For an array of reasons ― from the low birthrate and late marriage, to divorce or widowhood ― the number of single-person households is growing, the institute said in a recent report. 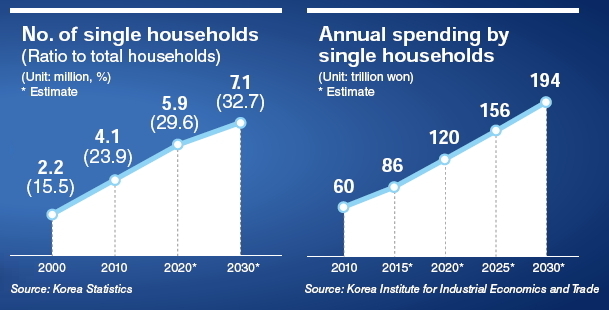 With a sharp rise in numbers, spending by single-person households also will continue to rise, reaching 20 percent of total household spending by 2030, up from 11 percent in 2010, the KIIE report said.

With single-person households emerging as a new breed of customers, companies from consumer goods makers to travel agencies are studying their spending habits.

Based on the trend, they are developing goods and services tailored to the new customer group.

“Single-person households tend to choose products offering them convenience and based on their personal interests,” Han said.

Industries are starting to recognize the impact of single-person households on their sales. Lee Sang-min, an assistant manager at Gmarket, a leading online auction and shopping mall, said, “I see an increase in products for smaller houses or space efficient products. As our company predicts that the current trend will continue, we will work on providing customized services for them.

“Compared to last year, many products targeting solo households are posting double-digit growth. For instance, sales of mini rice cookers rose 34 percent in the first half of this year compared to the same period last year. Year-on-year sales of mini sofas and armchairs also rose 12 percent and 20 percent each in the same period.”

The rise of single-person households is affecting the travel industry as well.

“One of our top priorities in travel product development is to develop travel packages for single people,” said Chun Na-rae from the marketing team of HanaTour, the nation’s biggest travel agency.

The company has developed a tour package for female singletons in their 20s and 30s.

“Considering the traveling pattern of unmarried single travelers that they want to make their own plans, we minimize scheduled plans and only book flights and hotels,’’ she said.

“Currently, marketing of companies targeting single-person households is putting more focus on those in their 20s and 30s than other age groups, but more business opportunities could be created from aged households,” the KIIE report said.