‘Next global crash could come next year’

Despite the continued economic stimulus policies across the world since the 2008 financial crisis, the global economy is likely to face another crash next year, according to U.S.-based economic forecaster Harry Dent.

Regarding the outlook for the U.S. economy, Dent, who has for decades followed the booms and busts of the global economy, remained skeptical. Baby boomers who led consumption will cut back their spending with retirement, regardless of any kind of stimulus packages. Falling consumption linked with the changing demographic trends will dampen the U.S. economy once again, Dent predicted. 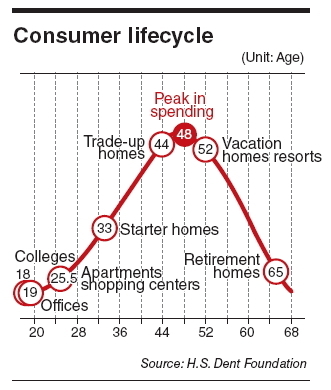 In response to rising concerns over an imminent exit plan by the U.S. Federal Reserve, he said it was not likely that the U.S. Fed would drop its quantitative easing policies soon, as it was not certain that the housing market, a key indicator of economic recovery, would remain as strong as it had been.

Dent also predicted a hard landing for the Chinese economy, pointing to over-investments in every type of infrastructure, in particular the real estate sector and its shadow banking system. He said China may be the most likely trigger for the next global financial crisis.

When it comes to the outlook for the Japanese economy, Dent, who predicted Japan’s decade-long slump in the late 1980s, forecast that the government’s expansionary economic policies, dubbed Abenomics, would have a temporary positive effect on its economy because its demographic trends do point up into 2020. But he warned that continued high levels of stimulus would be dangerous, especially if inflation did rise to Japan’s targeted 2 percent. Japanese bond rates would rise, and then Japan would feel the weight of its massive debt.

The high level of debt of Korean households, will challenge positive short-term demographic trends, Dent noted, saying the 136 percent debt-to-GDP ratio in Korea’s household sector is higher than in most other advanced nations.

To cope with remaining uncertainties, Dent advised Korean companies to get lean and mean quickly. He advised companies to cut fixed costs as much as possible and weed out weak product lines or sell marginal businesses before the next crash. Cash and cash flow are king in a deflationary downturn such as in the 1930s or 2008-2009, he added.

Following are excerpts of an email interview with Harry Dent on the outlook for the global and Korean economy based on demographic trends and economic cycles.

Q: U.S. Federal Reserve Chairman Ben Bernanke mentioned a possible exit plan from the Fed’s monetary easing policy in June for the first time. When do you expect the U.S. Fed to move toward the exit policy? What does the Fed’s exit mode mean for the U.S. and the global economy?

A: The U.S. Fed will only exit if the economy stays strong and it is not clear yet whether housing will stay as strong as it has been as investors seem to be backing away from housing, and rising mortgage rates are likely to hurt sales to consumers.

If the economy slows a bit then the Fed will not taper its $85 billion per month; it may even increase it. But an increase in stimulus would likely cause interest rates to keep rising and that would not be good for housing or stocks.

Q: The risk of a hard landing of China’s economy was not envisaged at the latest Group of 20 ministerial meeting. Do you agree with the G20’s stance? What are some implications of slower growth of China for the global economy?

A: I think China may be the most likely trigger for the next global financial crash that I see as very likely in 2014. China has been seriously overbuilding everything ― factories, housing, offices, malls, roads, railways, etc. Now their shadow banking system is getting out of control, like the U.S. into 2008.

Very few economists and politicians see a hard landing in China. I don’t see anything but a hard landing. China has over-expanded to levels never seen before. How could they not have a hard landing when their real estate bubble ― the largest in the world ― bursts?

Q: The International Monetary Fund recently put Japanese Prime Minister Shinzo Abe’s expansionary economic policies on a list of key risks ahead of the global economy. What is your view on the impact of “Abenomics” on Japan, which has been in a slump for decades, and on the global economy?

A: Japan is the one developed country that actually has mildly positive demographic trends into 2020. After that, Japan will see another sharp slide for decades.

Meanwhile, Japan is racking up government debt to 250 percent of GDP and rising. The extremely strong quantitative easing policies in Japan are working as a younger generation needs a jump start to an economy that has been on the edge of deflation for 23 years.

But continued high levels of stimulus will be dangerous, especially if inflation does rise to Japan’s target of 2 percent. This would cause Japanese bond rates to rise and then Japan would feel the weight of its massive debt.

What happens when their demographic trends turn down strongly again as they did in the 1990s? Japan will have an aging society with the highest debt of any developed country. That is a formula for disaster. But high stimulus is likely to have a temporary positive effect on its economy because its demographic trends do point up into 2020.

Q: What will be the biggest risks to the global economy in the second half of this year and for the next few years?

A: The biggest three risks that could trigger another global crisis are falling commodity prices, depressions in southern Europe and the China bubble, especially in real estate. China is the largest threat if its bubble bursts and it has a hard landing as I expect.

I see the greatest risk of a stock crash and downturn in the first half of 2014, with the global economy starting to get a bit rockier in the second half of 2013.

Outlook for the Korean economy

Higher immigration is the best solution to cope with aging of society, but that has not been a policy in Korea and it is not as easy as for Singapore that has English as a primary language.

Korea’s greatest strength is its very strong export sector which is 50 percent of GDP, higher than most countries. But that makes you more vulnerable to a global slowdown, and especially sensitive to a hard landing in China.

Q: You recommended that Korea open up wider to immigrants in preparation for aging and low-birthrate society, but this is not easy for such a homogenous society. Are there any other policy recommendations regarding this issue?

A: Raising birthrates through greater maternity benefits and supporting working women is the other alternative. The problem is that it takes about 20-22 years until such new births enter the workforce and contribute to the economy. The other policy is to encourage older workers to stay in the workforce longer, to age 75 instead of retiring at 60. This will also relieve the system of massive unfunded entitlements.

If baby boomers stay in the workforce longer it will offset some of the demographic decline, but it will also make it harder for younger workers to get jobs and enter the workforce. 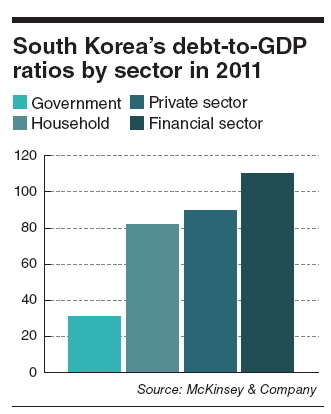 Q: According to the Ministry of Strategy and Finance, Korea’s household debt-to-GDP ratio reached 91 percent in 2012. But policymakers in Korea are downplaying some economists’ worries that the nation’s household sector is facing a crisis due to its heavy debt. What is your view on the debt level of Korean households?

A: Korea’s household debt-to-GDP ratio is higher than that of the U.S. and most European countries and Japan. So, this is worrisome. I see the real estate bubble bursting around the world in the next few years and that is what will cause such debt to be felt more by consumers and banks.

A: I see housing falling around the world and Korea is not an exception. Japan’s home prices have fallen now for 22 years without much of a bounce. Demographic trends would suggest that the same will happen in South Korea 22 years after Japan’s peak in 1991 or 2013, this year. A global financial crisis, which I expect between 2014 and 2019, will obviously hurt real estate prices and the economy in Korea as well.

Q: How should Korean companies prepare for the low-growth era and protracted global economic downturn?

A: Companies need to get lean and mean quickly. This is not the time to make major investments in capacity and to raise fixed costs and debt. Companies should cut fixed costs as substantially as possible and weed out weak product lines or sell marginal businesses before the next crash. Cash and cash flow are king in a deflationary downturn like the 1930s or 2008 and 2009.

The strongest companies survive and greatly expand their long-term market share. The weak go under or are bought out at fire sale prices by the stronger companies.

The winter season is the most challenging, but also the most rewarding for companies that see it coming and do have the strongest market share and the lowest costs.

● U.S.-based economic forecaster Harry Dent, the founder of Dent Research and a best-selling author, is famous for predicting global booms and busts based on demographic trends and their impact on consumer spending.

● He started building his reputation as he predicted in the late 1980s that the Japanese economy would soon enter a slowdown based on an analysis of Japan’s demographic trends.

● In the 1990s, he also forecast the unanticipated boom of the 1990s and the continued expansion into this decade in his book “The Great Boom Ahead.”

● In his recent book “The Great Crash Ahead,” he predicts the next great depression will come between 2014 and 2020.

● Dent received his MBA from Harvard Business School, where he was a Baker Scholar. At Bain and Company, a U.S.-based management consulting firm, he was a strategy consultant for Fortune 100 companies.

● He is the editor of the Survive and Prosper newsletter and created the HS Dent Financial Advisors Network. Dent runs the website www.harrydent.com.