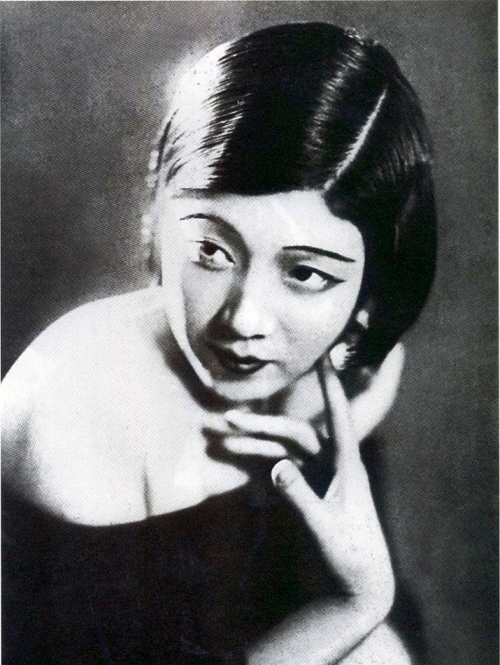 The life of legendary dancer Choi Seung-hee (1911-1969), lauded as one of the best dancers in Asia in the late 1930s, was entwined with Korea’s complex post-colonial politics, the Korean War and national division.

Of aristocratic birth, Choi trained under Japanese modern dancer Baku Ishii in Japan. She developed her own “modern” dances by combining what she learned from Ishii and Korea’s traditional dance movements.

“Choi Seung-hee was a creative, innovative artist who recreated the forgotten and traditional into something new, with her thorough research. She was the first hallyu star, who already charmed audiences in Japan, China, the U.S., Europe and South America back in the 1930s,” said Kang Joon-shik, whose biography of Choi was published last year on the centennial of her birth.

Her performance in Paris in 1939 was attended by Pablo Picasso, who described Choi as “a real artist who exceptionally portrays the dream and ideal of our time period.”

Following Korea’s liberation from Japanese rule in 1945, Choi was condemned in Seoul for her performances for Japanese troops during the Sino-Japanese War and defected to North Korea in 1946 with her husband An Mak, an active supporter of the North’s Workers’ Party of Korea.

With the full support from then-North Korean leader Kim Il-sung, she founded the National Institute of Dance, playing a significant role in laying the foundation of modern North Korean dance.

She was purged in 1967 and disappeared from public view. It was only in 2003 that Pyongyang made an official announcement that the dancer had died in 1969. 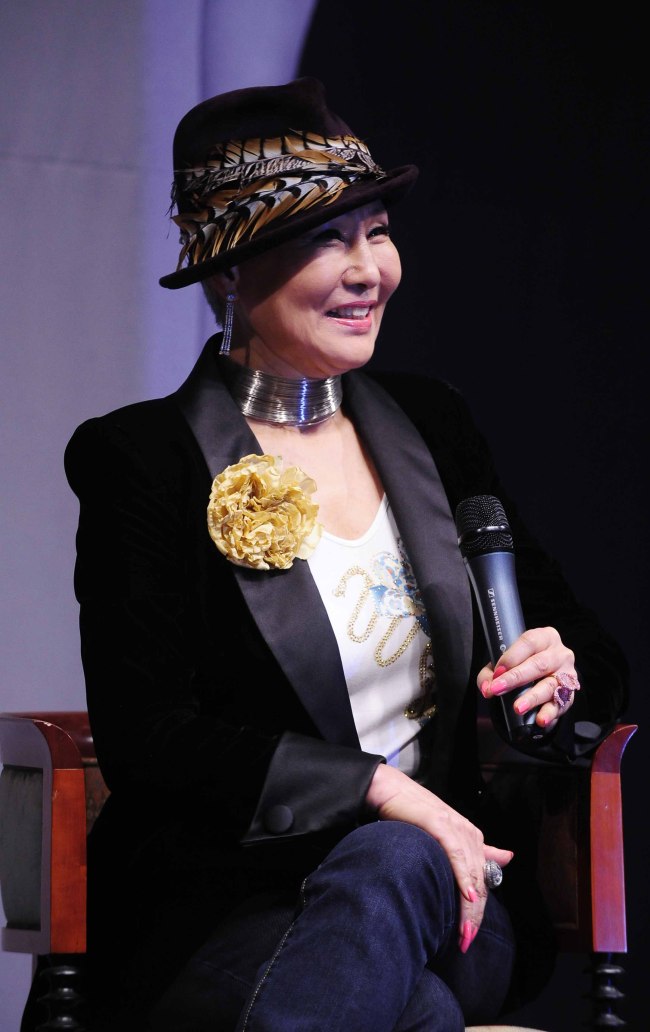 The 1960s was a decade of military rule and rapid economic growth. Park Chung-hee seized power in a military coup in 1961 and his authoritarian regime continued until 1979 when he was assassinated by a close aide. The period also saw rapid export-led economic growth, normalization of ties with Japan, and the sending of some 300,000 Korean soldiers to the Vietnam War.

Veteran pop singer Patti Kim made her debut at a local U.S. military base in 1959, taking on the stage name Patti after the American singer Patti Page. Kim, who initially dreamed of becoming a flight attendant, became the first Korean pop singer to perform in Japan in 1960 ― five years before the normalization of ties between the two countries ― and in Las Vegas in 1963.

She met her first husband and late famed composer Kil Ok-yoon in Vietnam while on a tour to perform for the Korean soldiers fighting there. The singer’s collaboration with Gil ― the two married in 1966 ― left some of the most enduring pop songs in local music history, including “Sarangui Changa” (Song in Praise of Love), “Sawori Gamyeon” (Once the April is Gone) and “Dear Maria.”

The 75-year-old retired from her 55-year singing career last year, upon the publication of her biography “Patti Kim,” penned by her friend and celebrated singer, painter and writer Jo Young-nam.

“Being on the stage is like an addiction,” Kim said at a press meeting last year. “But I wanted to leave the scene while I am still healthy, sing well, and feel sexy.” 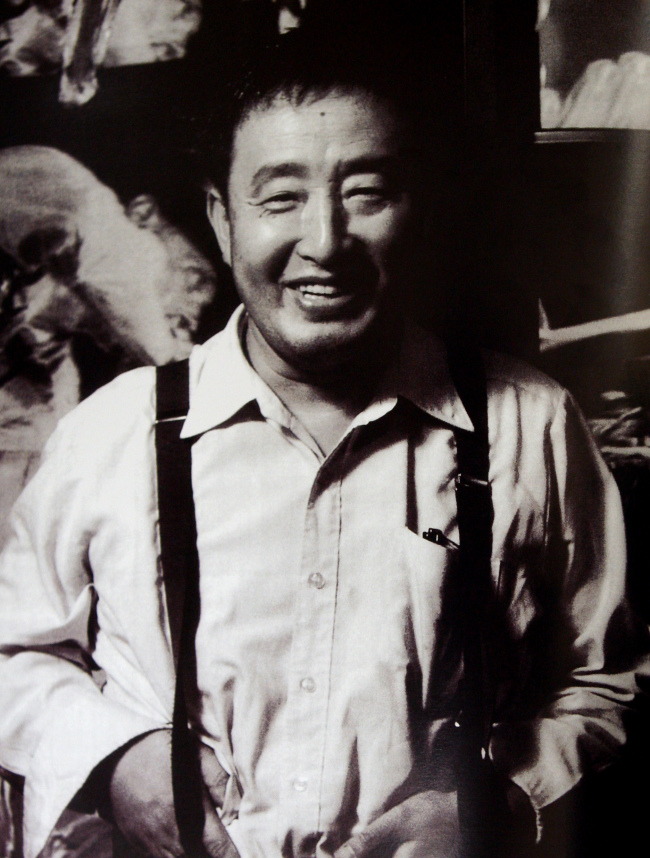 As the Yusin Constitution took effect in 1972, aimed at perpetuating Park’s rule, an extraordinary, creative soul was making his name as a groundbreaking artist in New York’s art scene.

Nam June Paik, a pioneer of video art, composer, performer and inventor who broke down cultural barriers, had been living in New York since 1964.

It was during the early 1970s that Paik started to create works such as a cello made of three TV sets stacked up on top of each other as well as some cello strings, which later led him to invent the term “electronic super highway” in 1974. In fact, his original works consisting of TV sets proved to be the artist’s outstanding insight that predicted today’s globally wired culture and environment.

Born in Seoul, Paik studied at the University of Tokyo and later at Ludwig-Maximilians-University of Munich. The artist, who worked all over the world and kept close ties with composers Karlheinz Stockhausen and John Cage and cellist Charlotte Moorman, was featured as one of The Century’s 25 Most Influential artists by ART News, an influential art magazine, in 1999.

He died in 2006 from complications of a stroke suffered in 1996. He remains the best-known Korean-born artist overseas. 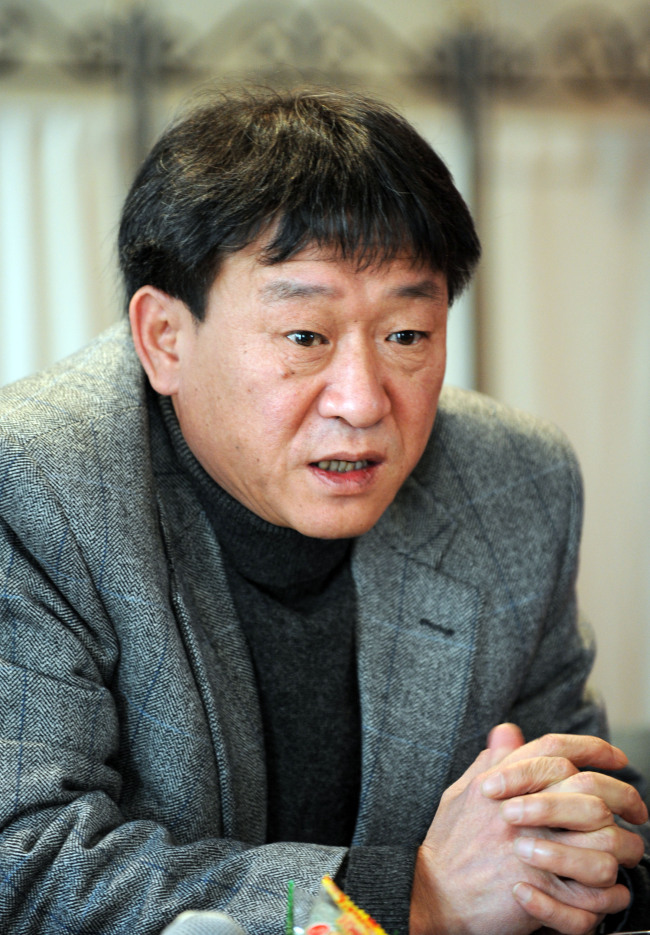 The 3S policy, however, had no impact on singer and playwright Kim Min-ki, the artist best known for his 1970 song “Morning Dew”― which is considered the symbolic tune of the pro-democracy movement of the ’70s and ’80s.

Kim entered Seoul National University to study fine art in the late 1960s and it was during his university years that he composed a number of songs, including “Morning Dew,” and formed close ties with singer Yang Hee-eun and poet Kim Ji-ha.

In 1972, he was briefly arrested by the police for teaching his tunes to university freshmen. His albums were subsequently censored by the government and pulled from record stores. After graduating from college, he worked as a factory worker, a mine worker and a farmer in the countryside.

He returned to Seoul in 1983 to write and produce plays and musicals. One of Kim’s most famous theater works is “Line 1,” his own adaptation of an original German musical by Volker Ludwig and Wolfgang Kolneder. The musical tells the story of a woman who rides the subway train, running into diverse people of different socioeconomic backgrounds.

Kim’s production premiered in Seoul in 1994 and had a very successful 15-year run, being performed over 1,000 times. Kim’s “Line 1” was also performed in China, Japan and Germany. 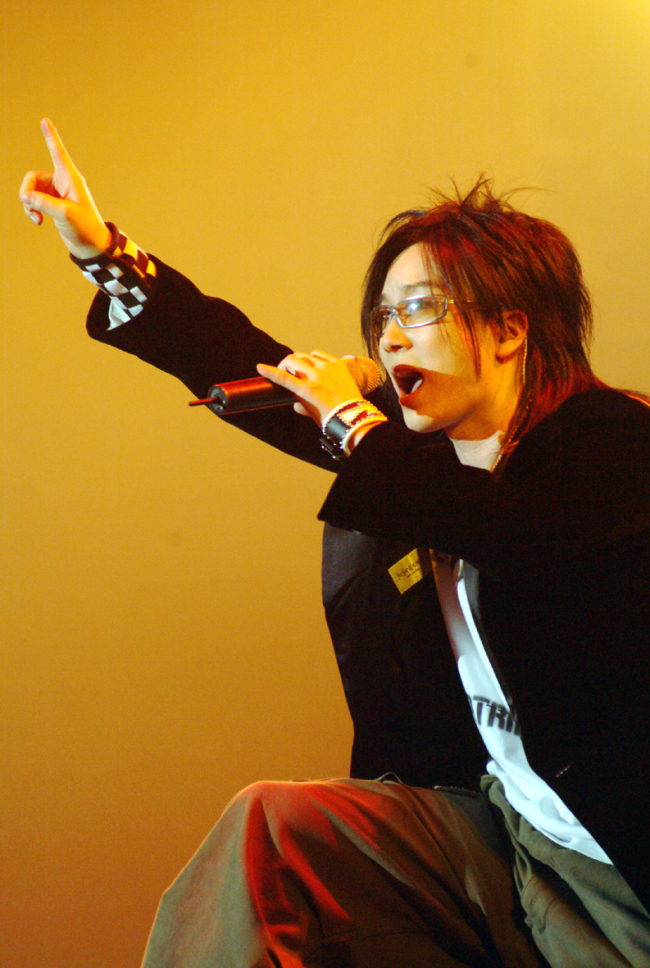 Talking about the 1990s would be incomplete without mentioning Seo Tai-ji, the iconic singer who introduced rap to Korea.

Referred to as the “president of culture” by his ardent fans, Seo, now 41, debuted as part of Seo Tai-ji and Boys in 1992 with two other members, Lee Juno and Yang Hyun-suk. The first single “Nan Arayo” became an instant hit. The song was a dramatic departure from the mainstream, featuring upbeat rap lyrics and catchy choruses.

The first half of 1990s was the era of “PC communication” ― the earliest form of Internet communication ― beepers, and TV romantic comedies such as “Jealousy” (1992) and “Our Heaven” (1990).

“Seo Tai-ji’s music was the soundtrack of the time, our youth,” said Kim Ji-hee, 37, who is still a Seo Tai-ji fan. “My teenage years were all about him.”

The group suddenly disbanded in 1996, just a year before the Asian financial crisis hit Korea in 1997. Heavily influenced by the band, local entertainment agencies started nurturing idol groups such as H.O.T., Fin.K.L and Sechs Kies, who were later followed by the, current hallyu stars, including Girls Generation, 2NE1 and Super Junior.

Seo has pursued a solo career since 1996, while his fellow member Yang currently serves as CEO of YG Entertainment, one of the biggest entertainment agencies in the country. 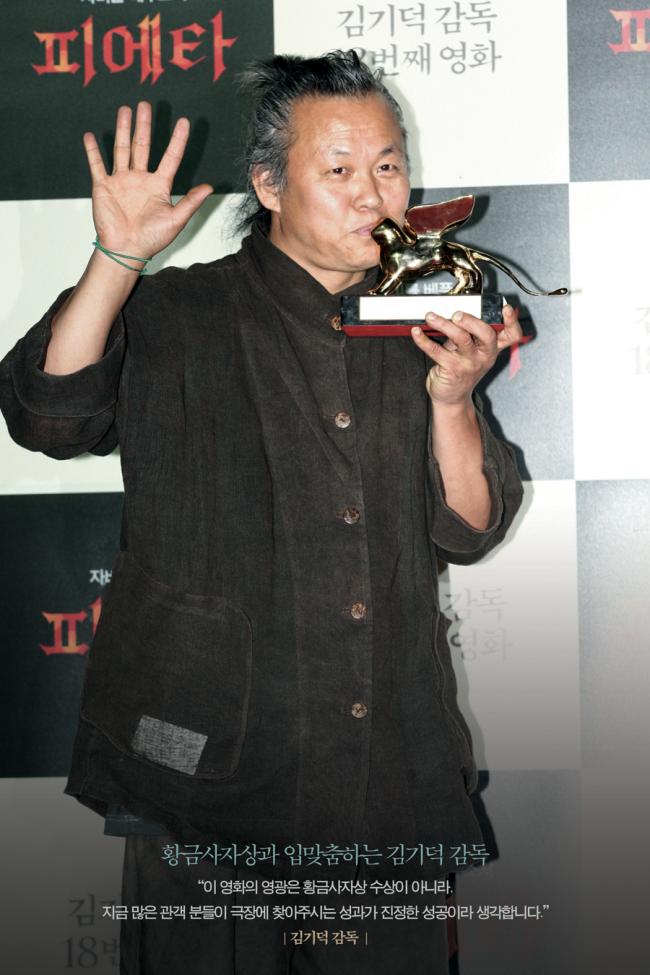 The year 2004 was a breakthrough year for Kim Ki-duk, one of the best-known Korean filmmakers overseas.

The director, who had long been considered an “outsider” in the local film industry, that year won the Best Director Award at the Berlin International Film Festival for “Samaritan Girl,” as well as the equivalent prize at Venice for “3-Iron.”

The former laborer who never attended film school released his first feature film “Crocodile” in 1996. His early works, including “Wild Animals,” “Birdcage Inn” and “The Isle,” did not always receive favorable reviews ― many were called “disturbing” or “eccentric” ― mostly because of their misogynist content as well as extreme violence.

Kim, however, gradually became one of the most significant filmmakers in contemporary Korean cinema, after receiving recognition from international film festivals throughout the 2000s. His career reached its peak in 2012, when he won the top prize at the Venice Film Festival with his 18th feature film “Pieta.” The director famously sang the Korean folk song “Arirang” while accepting the prize at Venice.

“I was reminded of myself when I was 15,” the director said when asked what crossed his mind as he was announced the winner. “At the time, I was working at a factory near Cheonggyecheon, carrying heavy goods from here to there.”

His controversial upcoming film “Moebius” ― which was only allowed to be screened in Korea after Kim removed scenes depicting incest ― has been invited to the non-competitions section of this year’s Venice International Film Festival. 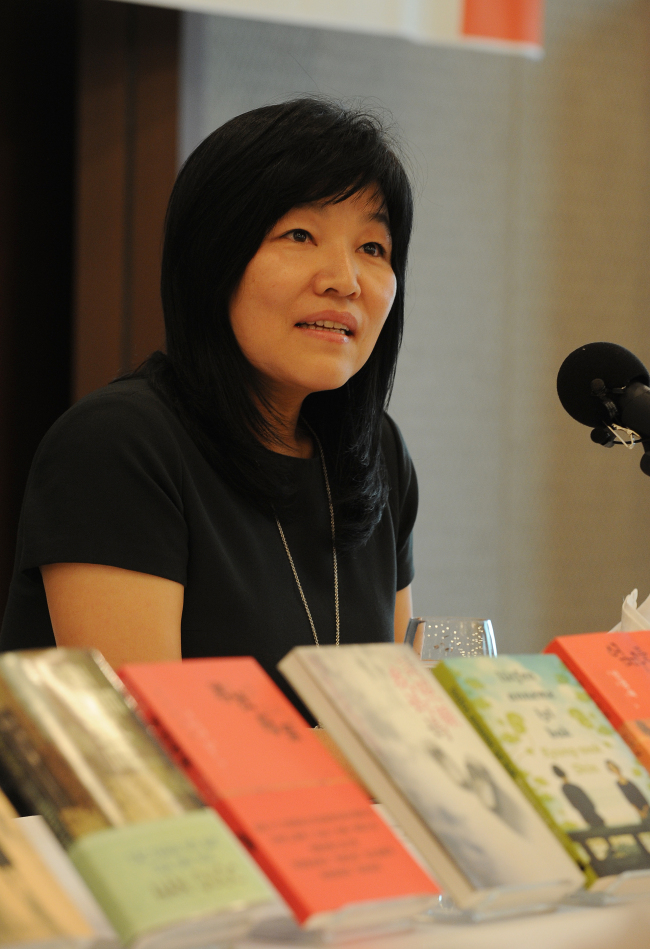 One of the biggest cultural figures of the 2010s is undoubtedly author Shin Kyung-sook, who rose to international prominence as the English translation version of her 2008 novel “Please Look after Mom” became a bestseller in the U.S. in 2011.

She won the prestigious Man Asian Literary Prize for the novel last year, becoming the first Korean and first woman to receive the honor.

“The novel is an incredibly moving portrait of what it means to be a mother, but also the tradition and modernity of the family in South Korea,” said Razia Iqbal, the chair judge of the Man Asian Literary Prize.

“Please Look after Mom” is the writer’s first book to appear in English. The novel is considered as a “pioneer of literary hallyu,” as no other Korean novel had enjoyed such popularity overseas.

“Realizing that I have foreign readers, on top of my Korean ones, encourages me to do what I’ve been doing,” the author said after her world book tour in 2011.