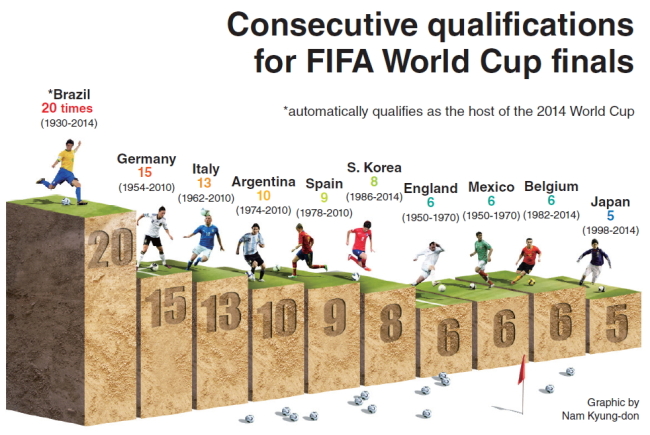 By qualifying for its eighth consecutive FIFA World Cup finals Tuesday, South Korea maintained its standing in an exclusive group of football powers.

The country lost its final qualifying match to Iran 1-0 Tuesday but still gained a ticket to the 2014 World Cup finals in Brazil on goal difference.

Only five other countries ― Brazil, Germany, Italy, Argentina and Spain ― have had more successive qualifications. Brazil is a distant leader with 20 straight qualifications from 1930 to 2014, followed by Germany with 15. Brazil automatically qualifies for the 2014 finals as the host country.

South Korea’s streak is the longest in Asia, followed by Japan.

South Korea has played in every World Cup since the 1986 edition in Mexico and made its first World Cup appearance in 1954. It hosted the World Cup finals in 2002 jointly with Japan.