And the Asia-Pacific region will surpass North America in four years as the world’s wealthiest region, according to a report by the Boston Consulting Group.

But it predicts that revenue growth and profits at wealth management firms will fall over the next five years, as the faster creation of wealth in Asia-Pacific and other developing regions poses challenges that will rob firms of the momentum they started to gain in 2012. 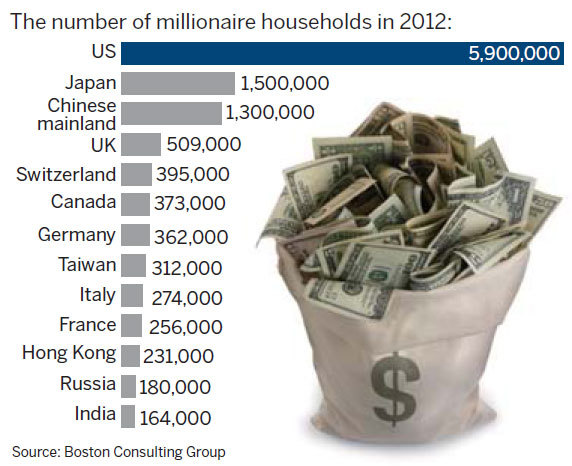 BCG calculates millionaires by their investable assets excluding a primary residence or business. In 2012, the U.S. had the most millionaire households, with 5.9 million, followed by Japan with 1.5 million and the Chinese mainland with 1.3 million.

The U.S. had the largest number of billionaires in 2012, but the highest density of billionaire households was in Hong Kong, followed by Switzerland.

The report, released on Thursday in New York, states that “new world” regions such as the Asia-Pacific, excluding Japan, are expected to account for nearly 70 percent of the growth in global private wealth in the next five years.

By the end of 2017, the Asia-Pacific region will see its private wealth grow to an estimated $48.1 trillion, surpassing North America as the world’s wealthiest region, the report said.

Last year, the Chinese mainland accounted for 48.2 per cent of total wealth in households in the Asia-Pacific, excluding Japan. The region had 20.7 percent of global wealth.

By 2017, according to the report, the mainland’s share of Asia-Pacific wealth will rise to 57.3 percent, increasing the region’s share of global wealth to 28.1 percent.

In Shanghai, Si Yongrong, 27, will take over her family’s construction and stock market business in two years’ time. She said she will definitely need a third-party institution to manage the assets and wealth of the business when she takes over.

In a report on mass affluence in China released in March by Forbes China and the Beijing-based wealth management company CreditEase, 28.3 percent of respondents with investable personal wealth of at least $100,000 said they need wealth management services.

Shi Guowei, the research director of Forbes China who wrote the report, said, “Whether they manage their wealth on their own or they select entrusted wealth management, most of these affluent Chinese prefer professional advice from wealth managers, which indicates that institutions have a high chance in this regard.”

By Michael Barris and Shi Jing