With the rise in nuclear families, more new and expectant mothers have found themselves unable to rely on their parents for help. Therefore, the government hopes to support the early stages of child-rearing through such measures as looking after the physical and mental well-being of mothers who are exhausted after delivery, and assisting with breast-feeding.

The government intends to include the centers in a basic plan for economic and fiscal reforms to be compiled in June, and to launch a trial operation next fiscal year. 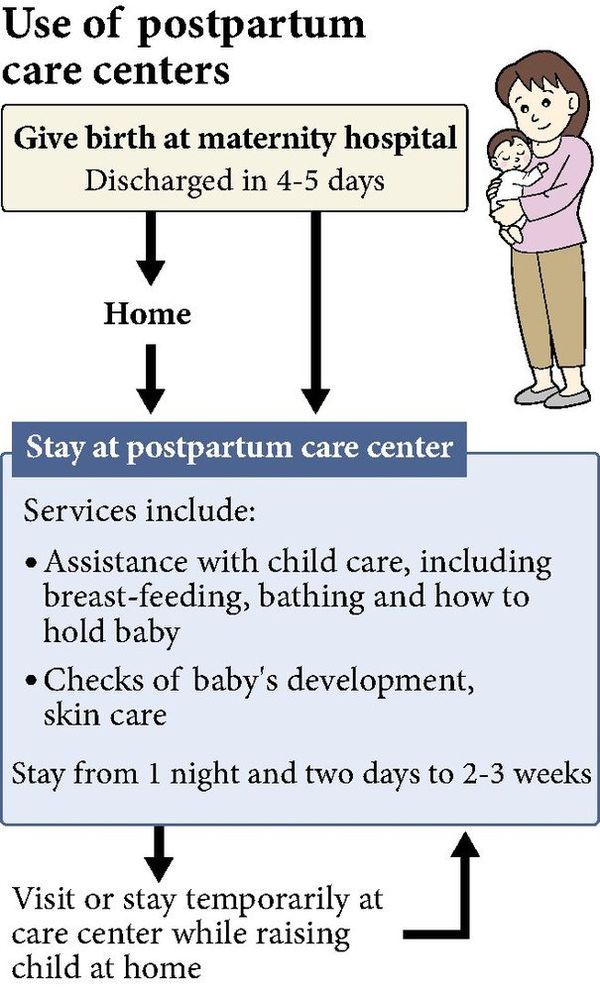 Postpartum care centers would be staffed around the clock with midwives and other personnel. Staff would provide such services as helping mothers convalesce, giving checkups for babies, teaching mothers how to bathe and hold newborns, and advising them on child-rearing.

With the decline in multigenerational households, many mothers have no one to help them after giving birth. Meanwhile, due to a shortage of obstetricians, the length of the average hospital stay after childbirth has fallen from one week to four or five days.

Ten percent of women are said to develop postpartum depression as a result of leaving the hospital before they are comfortable with breast-feeding, as well as from anxiety about child-rearing and fatigue.

In some cases, these issues have led to such problems as child abuse and an aversion to having more children, so experts have cited a need for postpartum care.

Tokyo’s Setagaya Ward, in cooperation with a university, opened its own postpartum care center in 2008. Its 14 rooms are always fully booked.

However, the center’s construction cost 240 million yen ($2.4 million), and Setagaya Ward also provides the center’s operators with an annual commission of 115 million yen. As a result, interested local governments have been reluctant to introduce similar facilities.

Therefore the government plans to include postpartum care centers in an upcoming proposal to be compiled by a panel of experts comprising a task force assembled to address the nation’s birthrate crisis.

Such centers will also be included in a basic plan to be compiled in June.

The government aims to recruit municipalities that wish to establish such centers and conduct a trial operation. It will begin subsidizing the cost of managing such facilities in fiscal 2015, as part of a new system to support children and child-rearing to be funded by consumption tax revenues.