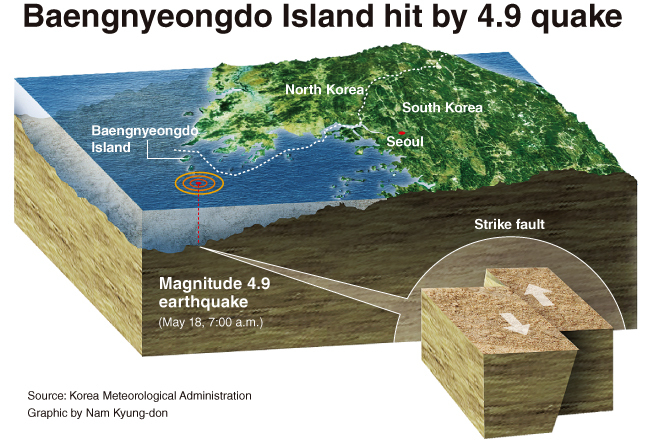 A magnitude 4.9 quake occurred near waters off of Baengnyeongdo Island in the Yellow Sea, marking the eighth time in a week that a tremor was reported in South Korea, the Korea Meteorological Administration said Saturday.

The seismic event took place at 7:02 a.m. with the epicenter located 31 kilometers south of the island that is the northernmost of the “Seohae Islands” that lie just south of the sea demarcation line that separates the two Koreas.

The KMA said the quake was the sixth largest detected since its started keeping detailed data from 1978 onwards, and was the second highest magnitude reading this year after the 4.9 tremor that occurred northwest of Heuksan Island off the southwestern tip of the country last month.

It said people reported the quake in Seoul, Incheon, Suwon and Ansan.

“We are in the process of determining the cause of the latest quake,” a official said. He added that right after the quake a 2.2-3.3 tremor was reported in the same area around 7:54 a.m.

Meanwhile, the KMA said that largest quake on record was the 5.2 magnitude event that occurred 80 kilometers off the Uljin cost on May 29, 2004. The quake was felt by most people around the country. (Yonhap News)