Because the unoccupied houses are seen as disruptive to a neighborhood’s scenery and problematic in terms of disaster prevention, the central and some local governments have begun taking action.

A woman living in the southern part of Adachi Ward, Tokyo, where many old wooden houses are concentrated, said she worries about potential damage from the roof of a house next to hers.

Not too long ago the abandoned house’s galvanized sheet iron roof was blown off by a gust of wind and struck the side of her home. “Whenever a strong wind blows, I can’t sleep well,” she said.

A residential area in a northern part of the ward contained an abandoned apartment building until December 2011 that was called a “ghost house.”

The ward office received many complaints about the building such as, “It’s dangerous because children enter and play there,” and “Young people break in and smoke inside.”

The ward checked the building’s registration records but was unable to reach the owner at first.

After contacting past residents, it finally tracked down the owner, who lived in the United States. The ward was then able to obtain a letter from the owner authorizing the demolition of the building.

In a residential area of Hachioji, western Tokyo, last September, a fire broke out and burned part of a vacant house.

A man living on the other side of the burned property said: “Weeds grow wild around the house. Nobody dares approach it. Because there are other vacant houses (in the area), I worry about a recurrence of similar incidents.”

The Land, Infrastructure, Transport and Tourism Ministry conducted a survey on the problem with municipal governments nationwide in 2009. It asked about what kind of troubles had been caused by abandoned homes.

Many local governments cited problems such as “Deterioration of scenery and landscape,” and “Disaster- and crime-prevention capabilities have diminished.”

The Internal Affairs and Communications Ministry conducts its Housing and Land Survey every five years. 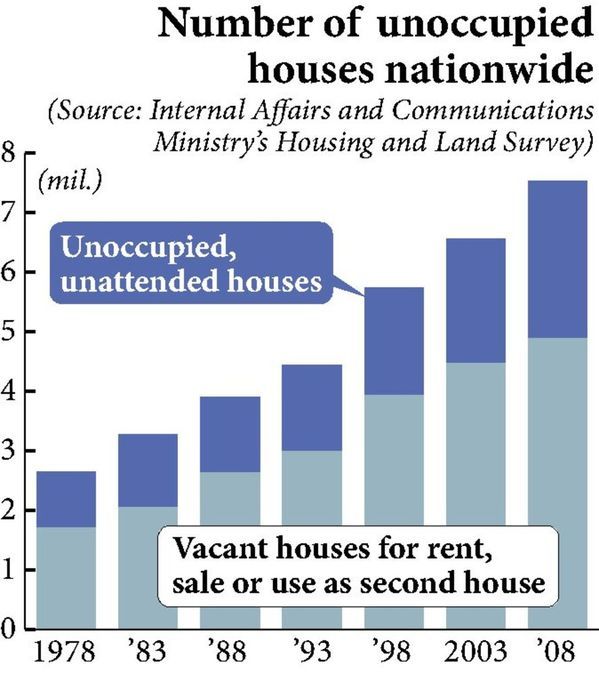 According to the 2008 survey, there were about 7.57 million unoccupied homes across the nation, including apartment units. The rate was at its highest ever at 13.1 percent.

Of them, the number of abandoned houses, excluding properties for rent, sale or use as a second home, was about 2.68 million. The figure drastically rose from about 1.82 million reported a decade prior to that.

Why have the figures increased even in urban areas?

Hidetaka Yoneyama, a senior fellow of Fujitsu Research Institute and an expert on issues related to unoccupied houses, said many of the houses in question are about 50 years old and were built during the period of rapid economic growth from the mid-1950s to the early 1970s.

With the rising trend toward homes shared by only nuclear family members, the owners’ children ceased living together and the house became vacant after the parents died.

Even if children inherit the houses and land, the homes are usually eventually abandoned for such reasons as:

― The legality of rights among family members is complicated and multiple heirs are involved.

― The heirs live far away and do not have a good understanding of how to maintain vacant houses.

― The heirs cannot afford to maintain the house.

In some cases, if vacant houses are demolished, new homes cannot be built on the same land.

The Building Standards Law stipulates that a plot of land with a building on it must in principle open onto a road at least four meters wide. A strip of land at least two meters wide must also connect to the road to allow for emergency vehicle access.

But some plots with unoccupied houses do not meet these conditions.

Also, if owners demolish abandoned houses and leave the land vacant, they will no longer be eligible for a reduction or exemption from the fixed asset tax for residential land.

If a plot of land measures less than 200 square meters, the taxable value of the land alone would jump sixfold from the tax base before demolition of a vacant house on the land.

By Yasuto Akaike and Daichi Okayasu